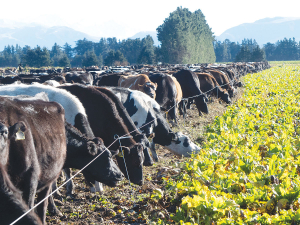 New research shows the crop should make up no more than 30% of lactating cows’ diet and 60% for non-lactating cows.

The Sustainable Use of Fodder Beet research project looks at nutrient and mineral interactions, and impacts on long-term animal health and welfare. A literature review undertaken as part of the project has confirmed the crop’s benefits and challenges.

“Fodder beet will continue to be a key part of New Zealand dairy systems – but it should not be seen as a complete diet,” says DairyNZ senior scientist, Dawn Dalley.

Dalley says this makes it an attractive option for farmers. But because of the high sugar content, careful transitioning onto the crop is critical, she adds.

The use of fodder beet has increased over the past decade and today around 55,000ha is estimated to be planted annually in New Zealand. Most fodder beet is grown in the South Island – with the project survey showing 79% of Canterbury/North Otago farms and 58% of South Otago/Southland dairy farms feed cows the crop.

In recent years, some farmers have become concerned about potential health effects on herds. Cows can develop ruminal acidosis, milk fever or nutrient deficiencies if fodder beet is grazed for long periods without appropriate alternative feed and mineral supplementation.

Recent research and nutritional modelling has reinforced current recommendations that - for consistent herd performance and to minimise nutrient deficiencies - fodder beet should make up no more than 30% of the diet for lactating cows and 60% for non-lactating cows.

Dalley says many farmers are successfully combining fodder beet with other feeds to provide cows with a diet that meets nutritional requirements and is cost-effective.

“By using feed testing which includes mineral composition analysis of fodder beet and other feed, farmers can tailor cow diets to address any nutrient deficiencies. Using this approach, fodder beet can be a valuable feed option which contributes to a productive dairy system.”

Fodder beet is a hardy autumn and winter crop with environmental benefits. The beet’s low nitrogen content results in reduced urine nitrogen concentrations, leading to less nitrate leaching from animals grazing the crop, compared to kale. It is also an important break crop in winter rotations which use kale and swedes, and allows farmers to successfully crop areas affected by brassica disease.