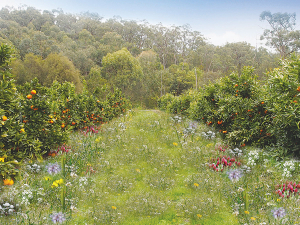 A project in Gisborne is exploring an organic method of dealing with pests on citrus orchards by understorey planting of flowers to attract beneficial insects.

A Gisborne based project is exploring an organic method of dealing with pests on citrus orchards by understorey planting to attract beneficial insects.

The two-year project is part of a $27 million, seven-year programme called A Lighter Touch, backed by the horticulture industry and Government through the Ministry for Primary Industries’ (MPI) Sustainable Food and Fibre Futures fund. It aims to shift the focus from traditional crop protection by conducting research, understanding crop protection products, and integrating biological and ecological processes into food production in New Zealand.

“Leaving bare earth under citrus trees and intensively mowing the strips between orchard rows may become a thing of the past as we revolutionise our approach through strategic planting,” says A Lighter Touch project manager Jeff Smith.

“Ranging from flowering perennials [clovers, alyssum] to annuals [buckwheat, phacelia] we’ve undertaken trials planting under and beside the trees. These plants and others may hold the key to enhance our agroecosystem and provide resources for beneficial insects to thrive which would reduce the need for applications of chemicals.”

The project has brought in researchers from Lincoln University and Plant & Food Research who extensively reviewed current literature on how to plant to attract the natural enemies of our most persistent pests. The researchers are now translating theory into practice.

“We’re testing to see what works under New Zealand conditions,” says Smith. “Seeds were planted late last year on two trial sites – one in a valley and one on the plains – alongside two control sites.”

The plains planting struggled to establish but the valley planting was more successful.

“This was because there was more rainfall in the valley and the landowner also had sheep which trampled seed into the soil.

“In future we may look at autumn sowing to see if we can achieve more consistent establishment.”

Smith says the programme is regularly collecting data on the trial and control sites including fortnightly monitoring for insect presence and species.

“By spring we’ll be able to evaluate how effective the planting has been in the first year… We’ve found that so many growers want to find a better way of planting, with less reliance on chemicals. While citrus was chosen for the model system, our findings should be adaptable for other perennial growing systems.”

Wiping out those weeds

Over the years, Ashburton-based Rotowiper has pursued one main objective – to design and manufacture an effective, cost-efficient method of controlling/eradicating weeds in pasture and crops.

Benefits many and varied of reducing soil compaction

For many years, reducing soil compaction has been recognised as an efficient way of increasing production for grassland and arable operations.

Taking the stress out of autumn calving

Heat detection is a challenge in any season, but autumn calvers know that cold and wet weather slows cows down, making heats harder to call with confidence.

A warning from his wife not to hang around the house and get under her feet when he retires has prompted a Feilding-based farmer to launch himself into a new and successful career – as an artist, painting rural scenes.