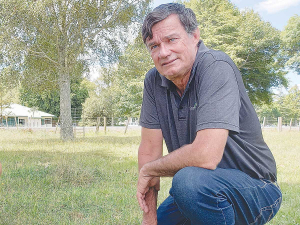 Pasture Symposium organising committee chair David Chapman believes it will feature the best range of speakers on pasture resilience every brought together in NZ.

Organising committee chair David Chapman says the event will arguably feature the best range of speakers on this topic ever brought together in NZ, who will share their observations and latest findings at the one-off Resilient Pastures Symposium (RPS).

He says it's no coincidence that the presenters align so closely with what he describes as commonly-voiced suggestions about the future of NZ grassland farming.

"It's all about the soil and/or the farm system. That's where the answers lie."

Chapman, principal scientist at DairyNZ, says speakers were not invited to the RPS solely on the basis of this theme - but there's a notable overlap.

Included in the programme, for example, are presentations from two Northland farmers who are "passionate pasture people". Both Allister McCahon and Murray Jagger will share their experiences and thoughts about where to next for Northland pastures.

Speakers covering trends and prospects on this side of the Tasman include NZ environment and climate change researchers Liz Keller, GNS Science; MPI's Gerald Rhys; and Cecile de Klien and Sarah Mansfield from AgResearch.

The symposium will wrap up with a workshop session, to distil what farmers, industry leaders and scientists identify as critical directions for future pasture research and development.

The RPS is being held by the NZ Grassland Associateion. Register online at www.grassland.org.nz.

Stock must be fit to travel