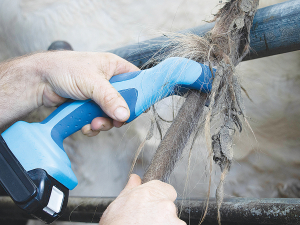 The Switch tail trimmer is not only ergonomically designed to cows’ tails but also reduce the risk of repetitive strain injury in users.

With tail docking banned since October 2018, tail trimming has become more popular. However, frustrations still abound as traditional clippers are not particularly suited to removing dags or matted hair. Firstly, because these were probably designed for removing wool from a sheep’s back; secondly, because they are quite heavy.

Lisa Newman, a farmer’s daughter from New Plymouth and a student at Massey University, was very familiar with the problem. So she set out to design a dedicated trimmer that was suited to the conformation of the cow and also friendly for the operator.

Extensive initial research within the dairy industry, which also involved speaking with veterinarians and animal care specialists, confirmed the need. But she also went on to look at a wide range of animal sizes, alongside shed design and working environments.

Newman’s design, Switch, is the only device that is ergonomically designed to trim cows’ tails – as well as reduce the risk of repetitive strain injury in users. Currently a design concept, it is at a stage where discussions with potential manufacturers regarding commercialisation are happening. It was also an entrant in the Fieldays Innovation Awards and recently took out a James Dyson design award.

Featuring clipper blades that mimic the profile of a cow’s tail, so trimming more area each pass than a traditional flat trimmer. With the outer blade oscillating over an inner fixed blade, there is reduced risk of injury to the animal and the user.

Power is provided by an 18 volt/1.5Ah lithium-ion battery that testing suggests should have a 2-hour run time. Weighing in at 1.5kg, that weight is counterbalanced to take away the potential for RSI. Meanwhile, the cutting head is inclined at 40 degrees to keep the user’s wrist in a more natural position.

The on/off switch is situated on the top face of the unit, allowing users to use the device in any position that feels more comfortable.

“Regular tail trimming helps promote better animal health and well being by keeping the animals’ cleaner at the back end and especially around the udder and teats,” Newman explains.

“It also helps reduce the risk of an animal from losing a part of its tail, as blood vessels become constricted by dried faecal matter and can result in self-docking.”

She says Switch is effective and easy to use.

“I also hope it will encourage farmers to move to tail trimming, rather than continue with the illegal practice of tail docking.”