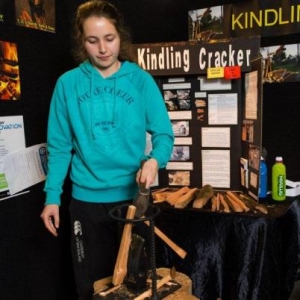 Judges were overwhelmed by the high standard of entries in the Fieldays Innovation Competition at Fieldays yesterday.

Darren Hopper, spokesperson for Vodafone, the major partner of the Fieldays Innovation Centre , says the competition is crucial to growing good ideas and gaining efficiency. New Zealand's agricultural sector is the envy of the world and synonymous with Kiwi ingenuity, he says.

The judges recognised two companies that have decided to tackle significant and growing challenges faced by farmers. Both produced smart, data-generating equipment and developed systems which enable the intelligent and intuitive use of data to improve decision making around farm management.

The Fieldays International Innovation Award went to Gallagher for their HR4 Hand Held EID tag reader and tag collector. It has a user-friendly design including smartphone-style interface which simplifies the task of collecting live animal data on farm.

In addition to great product design, the judges applauded Gallagher's efforts to help its customers manage an ever-increasing amount of animal data.

"The reader is backed up by an animal database which not only pulls in data from the reader, but integrates data from a range of sources, including devices made by other manufacturers and data provided by independent service providers," Tony Parker said.

"This product fits perfectly with the demands that Nait regulation puts on the individual farmer, without the need to be tied to applications owned by breeding organisations. It creates independency and a secure ownership of data until the farmer is confident to share this data with others".

The judges chose to present a merit award to C-Dax for their SmartControl with SmartMaps system, which utilises advanced technology to enable farmers to make more efficient use of their resources.

Further awards were presented at this morning's Fieldays Innovation Awards Breakfast. These awards are focussed on finding innovations that will truly benefit New Zealand agriculture within the Grassroots Invention category and Launch NZ Innovation category. All inventions must have been released to the New Zealand market within the last 12 months.

The Grassroots Major Category Award, sponsored by the University of Waikato, was presented to Steve Dawson for Quad Bike GPS Monitoring System and includes a $5000 reward. Mr Dawson was also presented with Vodafone's ICT Award.

Judges were impressed with the fact that Mr Dawson demonstrated a clear system that had a positive impact on farm safety and true demonstration of Kiwi ingenuity.

The Launch NZ Category Award, sponsored by The Straight Furrow, was presented to Grant Engle from Revolutionary Beekeeping Ltd for The Mobile Honey Harvester, which provides a system that enables all beekeepers the opportunity to harvest or extract their honey quickly, easily and affordably Engle said;

The Young Investor of the Year and the JAWS IP Service Award, which are part of the Grassroots category, were both awarded to Ayla Hutchings for Kindling Cracker, for its simple and 'easy to use' design that judges deemed would be a welcome addition to any household. The prizes include $1000 and assistance from James & Wells to take the intellectual property process further.

Ayla said that for a school Science Fair Project she's amazed at how her invention has evolved.

"I'm pretty overwhelmed. I didn't think I'd win my school Science Fair Project, but here I am at Fieldays with two awards!

For more information, head to the Fieldays website, www.fieldays.co.nz