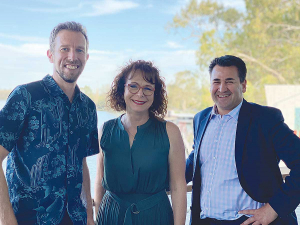 Should New Zealand and Australia be working more closely together in the agritech space to present a regional offer to the world?

It could be similar to the way the Scandinavians have established a regional reputation in other fields.

This was one observation after Callaghan-led agritech mission of more than 60 New Zealanders attended the agEvoke conference in Melbourne in February. The event focuses on agricultural innovation.

Yarrow told Rural News the rest of the world sees us as the same region.

American, European and even Asian investors in particular are more likely to visit if they are going to both countries.

“If you present as a region, suddenly it starts to have some scale and a combination of different farming systems and technologies.

“The Australians are really keen to do more and so are we.  We have built a few bridges there. We have a group called the Australian and New Zealand Agritech Council and we’re looking at opportunities where we can work together.”

He says New Zealand is viewed as a leader in agritech, which is unusual as it is usually seen as a small player globally.

“But certainly within the region we are seen as a leading light. That was pleasing to see that people wanted to engage with us and work with us.”

New Zealand is keen to partner with the research system in Australia so also visited Monash University this year and La Trobe University in Melbourne last year.

However, Yarrow point out that it is harder from start-ups to get a foot in the door in Australia than some of our people realise.

“Just because we share a lot of cultural similarities you can’t just walk in there and say ‘hey I’m from New Zealand’ and suddenly get business.

“You have really got to know what value you are bringing and especially for the tech start-ups.

“A lot of Kiwi companies think Australia is just like New Zealand, but it is not.”

Yarrow says the trip brought home the environmental issues in Australia with water, fire and other climate change issues.

New Zealand is seen as a leader in that environmental space.

“So the key there will be coming up with environmental technologies that also add to the bottom line.  We see some really cool Kiwi companies building on that.”

He adds that capital – especially venture capital – is always a challenge in New Zealand, but some good, early stage angel and incubator accelerator networks have been built.

The new government-initiated New Zealand Venture Investment Fund of New Zealand is looking to invest $300 million. Yarrow says agritech will definitely hope to attract some of that funding.

He says the key for start-ups is putting all the pieces of the pie together.

“That is where the research organisations come in, government can’t help.

“We can’t do it but we can support them, we are an enabler.”

So are some of the bigger ag companies like Zespri and Allied Farmers who were on the agEvoke mission as well.

Gaining exposure to relevant innovation, "without being swamped in the sheer volume of options", is one of the main challenges for winegrowers considering agrictech.