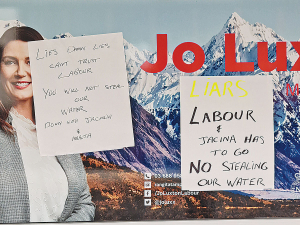 Reaction to the Government's mandated Three Waters reform has been strong in provincial NZ, with regional Labour MPs such as Rangitata's Jo Luxton feeling the wrath of local sentiment.

Government plans to push through its controversial three waters reforms - taking over the control of water services and assets from local councils - has been labelled theft.

Initially Labour promised the changes would be voluntary, but now it's taking the assets by force. National's local government spokesman Chris Luxon told Rural News the move "smacks of arrogance and government overreach".

Despite the wholesale opposition, Local Government Minister Nanaia Mahuta last week announced that the Government would legislate in early December to create four new water entities that would eventually take over the water assets currently owned by councils. She will also establish a new 'working group' to work on how these entities will be governed.

Mahuta's reform of the country's three water services - drinking, waste and storm water - has caused derision and outrage from the vast majority of the country's councils, which currently have ownership of billions of dollars' worth of water assets. Many have loudly opposed it.

"It is state-sanctioned theft," Luxon says. "By jamming through the reforms, it proves this government is obsessed with centralisation and control."

He has labelled Mahuta and the Ardern government "arrogant" for not listening to the overwhelming council and public opposition to the reforms.

"This is an asset grab and a clear case of the Government doing whatever it wants regardless of how strongly New Zealanders object to their overwhelming desire for centralisation."

Farmers and rural residents have consistently spoken out strongly against the reforms since they were first mooted. Federated Farmers says it opposes the mandated changes.

"Top of the list are issues around governance and accountability. The complexibility of rural water scheme ownership and operations has got rural people worried," Feds president Andrew Hoggard says.

He also questions how the four new mega water entities will ensure the needs of smaller and rural communities are not crowded out.

Technically, councils will still own the assets, but will not have a shareholding in the water entity to which they belong. Councils will also have very limited influence over the boards of the entities, which they'll be two steps removed from.

"It will create needless bureaucracy, strip away local control, and put distance between communities and decision-makers. Water services will be controlled by a complex smorgasboard of unelected appointees and officials."

Both National and Act have promised to repeal the reforms if elected back into government.