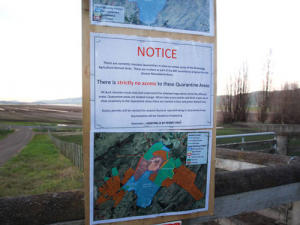 The ‘Beyond Bovis’ seminar features a range of high-profile speakers from the dairy, beef and scientific communities.

A seminar in Hamilton later this month hopes to rebuild and strengthen the New Zealand cattle industry in the wake of Mycoplasma Bovis (M. bovis).

Organisers expect farmers and rural professionals to attend the inaugural ‘Beyond Bovis’ seminar.

Held in conjunction with the Waikato A&P Show the event is, according to the Director of Showing Waikato, Doug Lineham, the first of its kind in New Zealand.

“The impact of (M. bovis) has extended beyond the breeding and animal containment strategies of individual farms to a widespread impact on the movement of all cattle,” Lineham said.

“Currently New Zealand is undergoing an eradication programme with no end-date although the Ministry of Primary Industries has suggested the success of the strategy will be measured at regular intervals.

“For the foreseeable future, MPI has recommended that farmers review all on-farm biosecurity establishing strict guidelines for animal movement on and off the property. The need to avoid nose-to-nose contact between cattle has presented A&P Shows and Calf Clubs with a conundrum, most electing to defer cattle events for at least the 2018 season; and potentially beyond.”

Waikato A&P Show has erred on the side of caution, cancelling all cattle events at this year’s show in Hamilton and has, in its place, initiated an event which will draw some of the most informed, innovative minds together to share and debate “where to from here” for the New Zealand cattle industry’.”

Lineham said the ‘Beyond Bovis’ seminar features a range of high-profile speakers from the dairy, beef and scientific communities “discussing the challenges and opportunities which are available to farmers around the country.”

The one day “Beyond Bovis’ seminar is open to all farmers, exhibitors and “anyone with a passion and commitment towards the on-going prosperity of the New Zealand cattle industry.

“The outbreak of Mb has been a catalyst for a rethink on the country’s biosecurity – from the farm gate to meat processors, plus consumers in this country and across the world.  ‘Beyond Bovis’ consolidates the outcome of those deliberations, for the first time, presenting farmers with a smorgasbord of services, products and supports to preserve and protect the viability of their farming businesses now and into the future,” Lineham said.