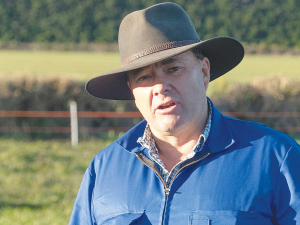 Questions have been raised about the group which has received nearly $2 million of government funding to promote regenerative agriculture.

Back in July, Agriculture Minister Damien O’Connor and Regional Development Minister Shane Jones announced a funding package of $20 million that they claimed was to help, “clean up waterways and create jobs”. The majority of this went to catchment groups around the country. However, part of this package also went into funding regenerative agriculture promotion.

“A further $1.87m is being allocated to the Quorum Sense Charitable Trust to support farmers to share knowledge about developing and implementing regenerative agriculture systems,” O’Connor said in his press release.

According to its own website, Quorum Sense was established by regenerative-agriculture proponents Jono Frew, Simon Osborne and Nigel Greenwood in mid-2018. The website states: “We are now set up as a charitable trust and intend to continue to increase and diversify what we do through both extension and research/innovation with the goal of providing even better support to a growing number of farmers.”

However, it has been revealed that Frew – who is treasurer of Quorum Sense – and fellow regenerative ag advocate Peter Barrett of Linnburn Station, are co-owners of the company Symbiosis Ag Ltd, which promotes regenerative ag and sells seed mixes to prospective ‘regen’ farmers. Frew and Barrett have recently also toured the country running seminars on regenerative ag and extolling farmers to change to the practise.

Concerns have been raised about a potential conflict of interest around Frew’s involvement with Quorum Sense and his co-ownership of Symbiosis, which sells seeds and promotes regen, and the possible commercial advantage he may gain from people converting to regen and buying Symbiosis Seeds.

There have also been questions raised about the funding being granted at a time when officials knew about the roadshow dates and Barrett promoting Linnburn, where there is a direct link from the Quorum website to his and Frew’s seed company.

Rural News put a number of questions to MPI about the funding. The ministry conceded that the project is actually funded through the ‘Productive and Sustainable Land Use’ programme, even though it was announced along with the ‘Jobs for Nature’ project.

MPI says Quorum Sense Charitable Trust was chosen because it is a “farmer-led extension project”. It claims that Quorum applied for funding earlier this year and it was considered by the MPI Sustainable Land Use team.

“The proposal was considered alongside others in terms of its alignment with the objectives of the Productive and Sustainable Land Use Package.”

The ministry says it worked with the Quorum Sense project team to develop an agreed project plan, budget and milestones for the project as well as monitoring and measurement methods to ensure the project provides a sound evidence base.

“As part of this, the MPI team consulted with science and investment colleagues, including MPI’s chief science advisor, and externally with other government agencies. That was to ensure the approach is consistent with other investment being put into exploring regenerative agriculture systems and science and ensure the project has an appropriate level of scientific input to satisfy MPI’s monitoring and measurement requirements.”

MPI told Rural News it expects this funding will support and increase the work the Quorum Sense Charitable Trust is already doing and has been doing in a voluntary capacity.

“Over the three years of the project, we expect farmers around the country to have the opportunity to benefit from the project, whether directly such as attending an event or being part of an extension group, or through information that will be disseminated, or in other ways.

“The project will be monitored and evaluated against the deliverables established between the Quorum Sense and MPI.

“Quorum Sense is required to submit regular reporting including against budget allocations and spend.”

MPI says a mid-contract evaluation will be completed by an independent evaluator.

Not everyone's a fan

While regenerative agriculture seems to have attracted many passionate advocates, it also has many critics – particularly in the scientific community.

Well-known ag sector scientists and commentators such as Jacqueline Rowarth and Doug Edmeades have been vocal critics. Both have questioned the scientific veracity of the claims made by RA advocates. They have also expressed concern about the legitimacy given to the practice by groups such as the Primary Sector Council’s multi-million dollar Fit for a Better World report and Beef+ Lamb NZ and its support for funding research into RA.

Meanwhile, the ‘mythology’ of regenerative agriculture and lack of scientific evidence to back claims about the practice prompted two renowned plant scientists to write to Agriculture Minister Damien O’Connor earlier this year.

They called on O’Connor to convene an expert panel of scientists to review all the claims made about practice.

The scientists feared this lack of critical evaluation is potentially damaging to the current world leading agricultural practices used by sheep and beef farmers in NZ.

“We are convinced this system (RA) lacks credibility and contains many aspects that are scientifically untenable. We believe it is our statutory duty as academics to provide some warning about the fallibility of these systems,” their letter concluded.

Humates gain traction on the ground

A major New Zealand wine company is digging into regenerative agriculture, with the launch of an 8-hectare vineyard trial in Marlborough.