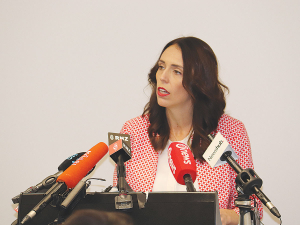 Ardern told agribusiness leaders at National Fieldays last week that the message is coming through to her.

“I absolutely hear that, how difficult uncertainty is for the industry,” she told about 100 people at the KPMG Agribusiness Agenda launch.

While the Government and industry agree on the challenges caused by climate change, water and biosecurity, uncertainty remains on how to tackle those problems.

“The issue for us, the Government, is that we could remove that uncertainty by coming out quickly with solutions engineered in Wellington,” she says.

“However they may not be the best solutions we could design and collaborate on, so there is uncertainty while we work collectively to find solutions. That’s potentially in the climate area. The challenge and opportunity is to keep looking together.”

Ardern pointed to the Government’s $229 million Sustainable Land Use Package in the Budget, and said the Government and industry must find and design solutions that will drive genuine change.

Ardern paid tribute to farmers for their work so far on the environment, saying this helped start negotiations on a free trade agreement (FTA) with the EU.

“On two of my recent trips to France it became clear that New Zealand got the mandate to negotiate the EU FTA because France saw we could lift the environmental proposition of the group.

“They saw that as a benefit and less of a threat to them.”

Ardern says farmers shouldn’t underestimate the influence of their environmental credentials on the EU FTA.

The KPMG Agribusiness Agenda 2019, based on interviews with agribusiness leaders, reports that the zero carbon legislation recently proposed by the Government is a popular topic.

Report author Ian Proudfoot says contributors reflected on the legislation as being the most confronting change to face the sector since subsidies were removed in the 1980s.

“Leaders recognise the industry has a key role to play in transitioning to a zero carbon future but it is fair to say everybody is starting their journey from a different place in respect of personal beliefs and actions already taken,” Proudfoot said.

“There was recognition that land use and farming systems will in some cases have to change.

“Rapid change will be best achieved through a mechanism that incentivises progress rather than delivering retribution for past actions.”