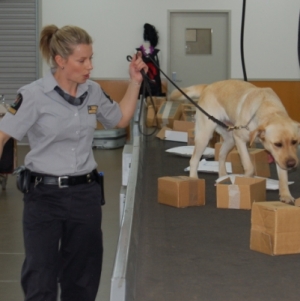 The seeds were found after a Ministry for Primary Industries (MPI) quarantine inspector became suspicious of two Chinese passport holders arriving from Shanghai and sent them to have their luggage searched.

The search unearthed 14 foil-wrapped packages of seeds. The packages had been concealed under the inner soles of shoes, within a carton lining, in a handbag and in some wedding invitations.

A police officer also conducted a personal search of one of the passengers after a MPI detector dog gave a positive indication when sniffing the pair.

As a result of the seed find, immigration officials refused the husband and wife entry permission to the country. They were sent back to China that night and are unlikely to be granted visas to enter New Zealand in the future.

"The pair acted recklessly. They either ignored or failed to understand that the illegal importation of seeds could devastate New Zealand's horticulture industry or native plant life," says MPI's Craig Hughes, Manager North Passenger and Mail.

He says the successful outcome was the result of positive interaction between all border agencies.

The seeds have yet to be identified.

Horticulture New Zealand (HortNZ) says fruit and vegetable growers around the country will be delighted to hear of MPI's dealings with the two illegal seed importers.
"MPI's decision to just send them back to where they came from suits growers just fine," says president Andrew Fenton.
"People who deliberately try to smuggle seeds into this country need to be sent packing.
"It would be nice if we could fine them heaps as well, but this sends a much stronger message to their friends, families and their own wallets."
Strong biosecurity protection is a major key to the continued growth of New Zealand's horticulture industry. "Vigilance at our border will always be the backbone for growth of all our primary sector industries. We can't grow without that protection.
"Anyone who threatens our border should get a quick look at the Arrivals Hall and then be turned around fast back to where they came from," Fenton says.

HortNZ chief executive Mike Chapman says a complete overhaul of the Resource Management Act is urgently needed for NZ to recover quickly from the effects of Covid-19.