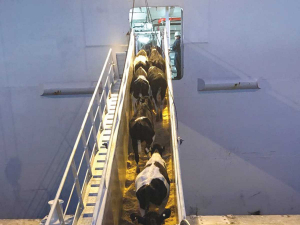 An estimated 300 farmers supplying 12,000 dairy cattle for export to China have been left hundreds of thousands out of pocket due to the non-arrival of a live export ship.

Some 300 farmers around the country - supplying 12,000 dairy cattle for export to China have been left hundreds of thousands of dollars out of pocket due to the non-arrival of a live export ship.

Livestock exporter, Hamilton-based Genetic Development (NZ) Exports, and its contracted farmer suppliers have been left high and dry after the carrier contracted by the company, Al Kuwait, was forced to dry dock to repair a broken propeller.

"Thus it (the ship) cannot commit to coming, even by end of May," an email to farmers from Genetic Developments explained. "Hence, we cannot ship the cattle that are currently in the pre-export isolation farm, near Tokoroa.

Your cattle are at this farm and unfortunately we have to face the reality of local sale of these cattle."

This means the cattle due for export will now either have to be sold on the local market or sent back to farms where they came from.

Some of the cattle were contracted at $1,100 a head but may now only be sold for $750 each - leaving some supplying farmers up to $350-a-head out of pocket. Meanwhile, those farmers who decide to take the animals back will have to pay for the transport of the animals themselves.

Rural News understands that it is not only farmers caught out; several transport operators, livestock agent companies - who procured the cattle from farmers on behalf of Genetic Development - are also currently left without payment.

Genetic Development managing director Dave Hayman told Rural News the situation is "way beyond his worst nightmare" and his company has been left millions of dollars out of pocket.

"We understand that some farmers are really annoyed about this situation, and it is extremely frustrating for us to be in this situation," Hayman says.

"We have our hands tied because the guys who buy the cattle will not receive the cattle because we can't guarantee that they will be delivered to China."

Hayman says his company has a history of successful breeding stock shipments and providing premium value to farmers.

He says in the past 18 months Genetic Development has exported tens of thousands of cattle to China and never had any problems.

"We work hard to maintain a good reputation with farmers and stock agents," he adds. "We regret and apologise for stress to farmers from this failure of the export process, which we could not prevent and was totally unforeseen."

Hayman says they had been let down by the shipping company who he described as "less than forthcoming". He added that the situation had been complicated by the fact there were only about four ships in the world of the size and required quality to carry 12,000 head of cattle.

Hayman added that Genetic Development can't get insurance to cover these kind of losses and therefore has no ability to pay farmers the agreed prices for the cattle. However, he is hopeful that prices gained at local sales will be more than the $750 a head the company has indicated.

Hayman also told Rural News that if Genetic Development does manage to get any compensation out of the shipping company, they will be sharing this with affected farmers.

He conceded it was "beyond a nightmare" scenario for the company.

"All we can do is try and manage it responsibly and hopefully people respect that."