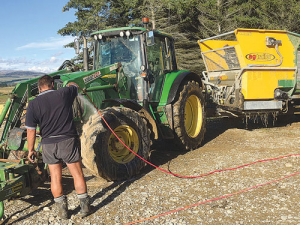 Walling told Rural News that he believes Zeestraten knowingly gave him infected animals. He has served notice through his lawyers and intends to seek damages “for anything MPI doesn’t cover, plus punitive losses and stress.”

Meanwhile, it has also been revealed that Southern Centre Dairies and Zeestraten have been charged by the Ministry for Primary Industries over the importation of farm machinery in January 2017. Both MPI and Chapman Tripp – the lawyers acting for Zeestraten – confirm that those charges do not relate to M. bovis.

Chapman Tripp has not responded to a request for comment on the Walling claim.

Their property was declared M. bovis-infected in January. They are now clear of the disease and looking to rebuild. However, they may now convert a block to dairying, to become self-sufficient in calves and less susceptible to future disease incursions.

Walling traces his infection to a mob of 61 calves received from Zeestraten on October 24, 2017. He believes Zeestraten would have known of his own M. bovis infection then, even though it was not officially confirmed until December.

Walling said many of the mob were “crook” the day they arrived at his farm, and nine were dead by the next day. He kept the rest in the belief they may have had rotavirus or similar. However, by December they were still not responding to treatment and other calves were also becoming ill.

When rumours reached him that M. bovis was in the district, Walling said he rang all his neighbours and warned them that “we have all the symptoms and they’re dying.”

He voluntarily put his farm into lockdown even before it was officially listed as an infected property on January 12.

Although Walling has been able to keep some bulls on a separate block, they ended up having to kill all their calves, numbering about 1550 – including 400 shot on the property – “which at this stage MPI are backing away from paying us for,” Walling said.

About 186 R2 bulls were also killed on the property.

Walling’s usual practise is to buy in about 1500 calves a year, sell half at 100-120kg, and continue to rear the rest to two or three years old. This year they were aiming to rear about 2000 calves and keep about 1000.

They also normally winter graze between 3500 and 6000 dairy cows, but this year could only graze about 3000, on a separate block, because of the lockdown.

While Walling agrees that MPI should not “willy-nilly” throw public money around – in some cases to people who were ripping the system off -- he says it is ridiculous to still be waiting eight months later.

“They value your stock, they count your stock and put a valuation figure on it. They should be able to write a cheque there and then.”

Meanwhile, Walling says they had a 228ha block consented for dairy about three years ago to give themselves a choice for the future.

“We have no choice but to go ahead with the conversion – finance permitting – in order to become self-contained in the supply of calves.”

Walling had been reluctant to convert because he preferred beef and drystock farming, whereas dairying meant loading up with more staff.

The couple also has a contracting business with about 20 staff, but that was mostly run by managers.

“I went farming to get away from having so many people around me,” he told Rural News.