Journey to sustainability will pay off 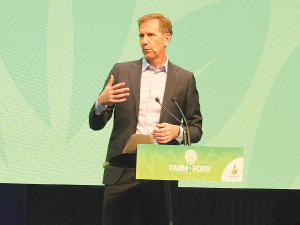 Changing to a more sustainable method of farming will be “in the money” in the long term, but the transition years are uncertain for a traditional farmer, says Weibe Draijer, chairman of Rabobank’s managing board.

If there is a downside in the change phase, they will hesitate, which is understandable, he told Rural News at the Farm2Fork seminar in Sydney.

“Our role and our mission is to ask ‘okay, how can we limit the downside in the transition so you can do the investment and reap the benefits over the long term and survive the intermediate change period?’ ”

Draijer says New Zealand, Australia and the Netherlands have all gone through an amazing agricultural revolution, bringing them to the forefront of productivity and to their role in the global food supply. But what got them there will not win the next era; they need to change to more sustainable processes.

He says other countries face the same challenges, such as Brazil where the farmers have to stop felling the forests.

“And it is the same in the Netherlands. I talk to dairy farmers who have to move to a less intensive use of the land… giving back some of the land to nature and going more in circular practices,” Draijer says.

“I think it would be the same in New Zealand. It is not so much that there is no money in the change but that there is uncertainty in the transition and that makes them nervous and rightly so.

“It is on us to think through how we can take out the uncertainty and bring the stakeholders together, like the Government, to make sure they don’t add to the uncertainty -- which generally they do.

“To take away the uncertainty they need to give clarity and direction, they need to provide financial services to help them navigate that uncertain phase.”

Making the change is “in the money” already with consumer demand starting to move in that direction.

“Whenever you hear farmers say ‘it is not economically viable’, that is just not true. In some part of the changes it might be, but a number of changes will put them to the fore.”

Draijer spoke earlier at the conference about the need to reduce food waste.

Asked how to achieve buy-in by farmers for that, he said farmers would much rather their food be eaten than lost. An example is tomatoes: growers are incentivised by the system to throw away those not ideal-looking.

“If we adopt a system where [the imperfect-looking] are more acceptable they would get more revenue. Whether it is bananas or apples or pears there is a lower-value use; if you could bring higher value and get paid for it they would benefit,” he explains.

“Waste can go to feedstock for animals, which is fine, but it can be used for higher value.”

Kiwi dairy farmers are being told to expect a significantly lower farmgate milk price in the coming season, as the global milk market absorbs the impact of COVID-19.

Dairy prices ‘hanging in there’