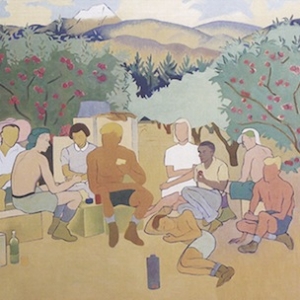 The Apple Pickers by Rita Angus

THE AUSSIES blocked our apple exports for 90 years, but they were keen to get their hands on The Apple Pickers – at least a noteworthy 1940s painting by the famous New Zealand artist Rita Angus.

But Nelson apple growers have played a major part in keeping the iconic work on this side of the ditch and securing it for the city’s Suter Gallery. The 1944 painting depicting apple pickers relaxing in a Upper Moutere orchard came up for sale suddenly and an Australian gallery wanted it.

Rita Angus was among a group of important artists, including Colin McCahon, who visited Nelson in summer in the 1940s for seasonal work picking apples, hops or tobacco to augment their art sales. These artists developed a distinctly New Zealand style of painting and landscape in the 1930s and 40s and their Nelson works were the start of New Zealand Modernism, says Nelson art historian Julie Catchpole.

Suter Gallery had works by all those artists except Angus. When The Apple Pickers suddenly came up for sale by the Angus Trust, the gallery had 10 weeks to raise $245,000 to buy it or likely see it go offshore to an Australian gallery. But the Nelson community, especially the apple industry, rallied to secure the painting for the Suter and on Friday the gallery announced it had raised the money ahead of time and unveiled the painting in the gallery.

Fundraising committee head Dame Ann Hercus told Rural News The Apple Pickers, although a painting unknown to most in the wider community, clearly struck a chord with the apple industry in the Nelson Tasman region.

“Orchardists and the corporate entities which service the great apple industry here now strongly identify with this nationally significant painting; they tell me it could be a scene from childhood on a family orchard long ago or a painting of today,” she says.

“They tell me that they see the acquisition of this work of art as part of their responsibility to their region and their own history. And they certainly do not want it to go to Australia! So they have given most generously to the cause. In a way, it has become their painting as much as the Suter’s.”

Craig Potton, chair of the Bishop Suter Trust, also acknowledged the “incredibly generous” support from the families and corporate entities associated with the apple industry. “They recognised and ‘claimed’ this painting as theirs and representative of their history and the region,” he said at the unveiling.

Former mayor and now winegrower Philip Woollaston donated a watercolour by Toss Woollaston – one of those 1940s influential artists in the ciricle know as ‘The Group’ .