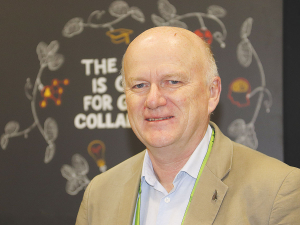 Ian Yule is behind a new research initiative for horticulture in Bay of Plenty with the formation of the PlantTech Research Institute at Tauranga.

A major research initiative in horticulture is underway in Bay of Plenty with the formation of the PlantTech Research Institute at Tauranga.

Its research director is Ian Yule, best known for his time as the professor heading precision agriculture at Massey University.

Yule describes PlantTech Research as an exciting venture bringing together technology companies in the Tauranga region to advance the use of artificial intelligence, machine learning, robotics and automation.

Eight companies and the Government have helped fund it. Now Yule is recruiting ten scientists, hoping to have them in place early in the new year.

Each of the companies invested in PlantTech will have a project undertaken by the science team and this is initially how they will get a return on their investment.

Also, several demonstration projects will be undertaken, including one on autonomous vehicles. And they will look at machine vision, which involves interpreting imagery, a technique improving all the time, Yule says.

“For example, how do we interpret fruit ripeness? Traditionally we have had to go to a lab and work out the quality of fruit but we can do this more often in the orchard.

“We can analyse what’s happening in the orchard so as to pick at the prime time and get the best quality fruit and results.

“Data analytics is very important and huge amounts of data are being collected across the horticulture industry.

“Now we are able to analyse that better than in the past.”

Autonomous vehicles will have the institute’s close attention, Yule says. The idea of programming these vehicles to do certain tasks in an orchard, and avoid obstacles, is attracting a lot of interest.

Robotics is technically feasible, depending on whether a machine can compete cost-wise with a human.

“I was recently in America where a situation arose of not enough workers to pick a crop, so the whole crop was lost,” Yule explained.

“As a result of this the asparagus industry is moving from California to Mexico and strawberry growers are saying they may go the same way because of the labour issues.”

Waikato University is developing a machine that will mechanically harvest asparagus.

Yule says PlantTech is trying to build teams with more ‘potency’ than other research institutes in specialist areas of horticulture in the hope they can generate extra value for the industry.