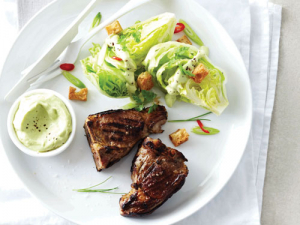 According to the study, a healthy diet for mental health includes wholegrains, vegetables, fish and lean red meats.

A new Deakin study proves simple dietary changes can be used as a possible treatment for depression.

Previous research has shown a link between diet and mental health disorders but the latest study is the first of its kind to confirm a healthy diet, which includes lean meats, significantly improves depression and anxiety symptoms.

The SMILES trial, published in BMC Medicine, was a 12-week randomised controlled trial looking at the effects of a healthy diet in the treatment of moderate to severe depression.

According to the study, a healthy diet includes wholegrains, vegetables, fish and lean red meats while limiting unhealthy extras such as sweets, refined cereals, fried foods and sugary drinks. Interestingly, the healthy diet was based on a modified version of the Mediterranean diet and is higher in fat and lower in carbohydrates than current nutritional guidelines.

“Clearly this study adds to the growing body of evidence that a healthy diet is an essential component of mental health,” says clinical psychologist Julia Rucklidge.

The study trial involved researchers at Deakin University randomly assigning one group to eat a healthy diet for 12 weeks while the other group received social support.

One third of the healthy eating participants reported improved mood and depression symptoms with only 8% of the social support group having the same effects.

An earlier study by the same authors found women who ate a more traditional diet had a 30% reduced risk for major depression and anxiety disorders compared to those following a Western dietary pattern.

A traditional diet is rich in vegetables, fruit, wholegrains and high-quality meats whereas a typical Western diet is made up of junk food, white bread, sugar and alcohol.

High-quality meats such as beef, lamb and fish, contain selenium, zinc, iron, vitamin B12, vitamin D3 and omega-3’s which are all known to play a role in brain function, behaviour and emotions.

Women who included these meats had more positive mental health outcomes than women who ate unhealthy, processed foods. It is thought processed and “unhealthy” foods such as refined carbohydrates, increase inflammation in the body and may, in part, explain the link between diet and depression.

But dietitian, Sarah Hanrahan, warns against obsessing over single nutrients and instead encourages an eating pattern that includes a variety of healthy foods.

“When we diet we often put too much focus on cutting out certain foods but this can lead to micronutrient deficiencies when we do not eat enough.”

“Deficiencies in essential nutrients can lead to worsening of symptoms of mood disorders,” says Hanrahan.

With many New Zealanders experiencing depression at some point in their lives, these latest results should encourage people to eat a healthy diet for their mental health.

Many doctors in rural parts of NZ are facing a cash-flow crisis due to the COVID-19 pandemic.