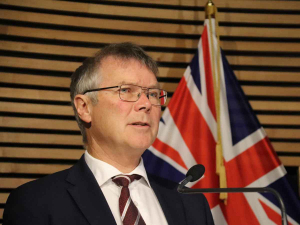 After months of discussion and input from scientists, primary industry representatives, iwi and local government, not to mention dealing with 17000 submissions, the new programme of reforms was announced at Parliament on Thursday May 28. The main objective of the reforms is to protect waterways and wetlands by setting in train a whole series of new regulations which government believes that over the generation will improve water quality.

With Covid-19 and the drought, some people in the primary sector have suggested that these reforms should be delayed as they may stress hard pressed farmers.

Parker says delaying the reforms would be wrong. He says NZ’s environmental performance   underpins what we get both in terms of agricultural produce and in tourism.

“ I think it is already clear that post Covid-19 international tourism is going  to be an even more competitive market than it has been  and we think that we need to build on that environmental which has economic benefits to the country,” he says.

Parker says in terms of the drought, most of the reforms will take time to roll out and the drought will be well and truly over by then.

Damien says it’s important that NZ deals with its environmental issues and believes that most farmers don’t see the drought as a reason to deal with the environmental challenges.

“What Covid has taught us is the importance of health and healthy food and my objective is to ensure that we continue to produce high quality food  so that we can have better nation at the end of that. Many farmers appreciated that and a lot of work has been done on farm to improve water quality,” he says.

Some of the requirements

An example is that by 2023 dairy cattle will have to be excluded from waterways over a metre wide and other cattle and deer by July 2025. Dairy farmers will also have to apply for a resource consent before converting more than 10 hectares of land to dairy farming. The same rules will apply to other forms of livestock intensification. Such fences must be three metres back from the stream, however, it’s been agreed that any present permanent fencing closer to the stream now will be deemed acceptable in the future.

On land with a slope of less than 10 degrees all beef cattle and deer must also be excluded from waterways of more than a metre wide by 2025.

The issue of excluding stock from steams on hill country will be addressed later through a combination of mandatory farm plans and regional council plans – all of which must be based on the country’s National Policy Statement on water.

There will also be limits placed on the use of nitrogen – 190kg/ha/year -  and dairy farmers will be required to report annually to regional councils on the quantity of nitrogen that they have applied per hectare.

As well there are special rules relating to the protection of wetlands.

Primary sector and other groups will be financially assisted with the implementation of the new clean water standards through a $700 million fund that will create jobs in riparian and wetland planting, removing sediments and other initiatives to prevent farm run off entering waterways.

Most of the reforms will be phased in over the next four years, but other are expected to take longer.