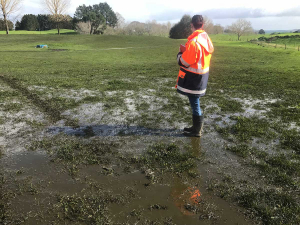 Waikato Regional Council is urging farmers to be vigilant after seven separate court cases found farmers to have unlawfully discharged farm effluent into the environment.

The cases have been sentenced over the last three months, with the final case being made public today, resulting in convictions and a total of $318,025 in fines.

The prosecutions were made by Waikato Regional Council under the

“Farming is obviously a huge and vital industry that contributes to this region’s economy and communities in many ways,” says Waikato Regional Council regional compliance manager Patrick Lynch.

Lynch says that the farmers and businesses prosecuted represent a very small portion of the industry.

“However, clearly there are still some in the industry who are not taking their environmental obligations seriously and continue to let the side down,” he says.

“It is now well over 20 years since the current environmental regulation has been in place to manage effluent in this region. I have no doubt that many will be disappointed to see cases such as these still happening.

“Many farmers have excellent systems in place, but we continue to urge all rural businesses to invest in the infrastructure needed to manage effluent effectively, and to ensure they manage those systems every day they are in use,” Lynch says.

In the first case, Trevor George Aitchison, a farm owner in Morrinsville, was convicted due to an event where he discharged effluent from an overflowing effluent sump and a disconnected irrigator in August 2019.

Aitchison was fined a total of $52,500 by Judge Brian Dwyer in the Hamilton District Court on 27 October 2020.

In the second case, Brok Farming Limited, a company operating a farm in Tamahere, was convicted in relation to over application of effluent that made its way to a nearby tributary in September 2019.

The company was fined $35,000 by Judge Melinda Dickey in the Hamilton District Court on 25 September 2020.

A third case saw Taupō dairy farmer John Richard Lockwood convicted in relation to over application of effluent in September and October 2019 and again in August 2020.

Lockwood was fined $80,500 by Judge David Kirkpatrick in the Taupō District Court on 1 December 2020.

In the fourth case, Sonya Liddle, a Te Pahu contract milker was convicted due to over application of effluent from two irrigators in August and October 2019.

Liddle was fined $33,500 by Judge Jeff Smith in the Hamilton District Court.

David Bruce Major, a contract milker employed on an Ōtorohanga dairy farm, was sentenced on three charges in a fifth case relating to inappropriate application of effluent from an irrigator in September and October 2019.

On each occasion, the effluent flowed into the Matapara Stream that ultimately flows to the Pūnui River.

Natural Spreaders Limited, a company operating a farm effluent spreading company based in south Waikato was convicted in relation to over application of effluent on a farm at Putaruru in August 2019.

The company was fined $37,125 by Judge Melanie Harland in the Hamilton District Court on 20 November 2020.

In the final case, Trinity Lands Limited, a company operating 20 farms in the south Waikato was convicted due to an incident of over application of effluent on a farm at Tirau in October 2019.

The company was fined $46,900 by Judge Melinda Dickey in the Tokoroa District Court with the sentence formally issued on 18 January 2021.

OPINION: Last week's announcement by the Government that it would replace the Resource Management Act (RMA) with new legislation has raised the hopes of anti-dairying lobbyists like Greenpeace.

Finally, the RMA is going

It seems like there are few tears being shed around the country about the news that the RMA is to be scrapped and replaced by three new separate Acts.

RMA to be repealed and replaced

The Government says it is delivering on its promise to reform the resource management system based on the review carried out last year.

Compliance, monitoring and enforcement data released by Waikato Regional Council for 2019/20 show that 21 environmental prosecutions were completed over 12 months, with 42 convictions against 23 polluters.

A large dairy farming operation, linked to Fonterra chairman Peter McBride, has been fined $47,000 for an effluent management breach.