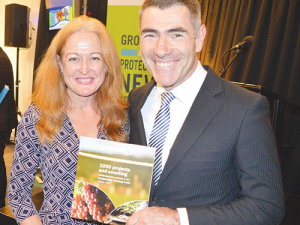 One of the first projects approved under the Government’s Sustainable Farming Fund (SFF) in 2000 targeted avocado orchard management.

While the SFF project did not translate into instant success, the groundwork done many years ago is now bearing fruit for the industry.

In 2000 the avocado industry was valued at $48 million with 2800 growers relying heavily on exports to the US. Today the industry is valued at $200m.

SFF cash paid for the industry to hold discussion groups -- 1400 field days in 2001 and since.

But Avocado NZ chief executive Jen Scoular says there were lots of discussions but “not much agreement because there was so much difference in best practice on orchards”.

Speaking at a recent function to mark SFF’s 1000th project, Scoular acknowledged that the “very ambitious” goals set under the first SFF project were not met on time. “But 16 years later we are successfully implementing similar programmes under PGP.”

She notes that the industry was correctly cautioned about the need to share knowledge among a network of growers, scientists and industry leaders.

“The avocado industry, perhaps, was slow to take up the advice but I can proudly say that like everyone’s favourite -- avocado on toast -- those goals set in 2001 are being smashed right now.”

Scoular points to “a lot of growing up of our industry”.

“[We realise] collaboration drives results; the avocado pie is huge… we don’t need to compete for someone else’s slice; we can just make the slice bigger.”

Scoular says the mentality among avocado growers has changed. After the first round of SFF-funded field days and discussion groups in 2001, in a survey 18 months later growers were asked if they had changed their orchard management practices; growers had not.

“There was regional variation in orchard management; some growers thought they had the secret to successfully growing avocados and did not want to share them,” says Scoular.

But the mindset started changing when the industry faced trouble; the NZ dollar jumped to US70c and export receipts from the US slumped. After another 10 years of “ups and downs”, the industry’s value hovered at $60m in 2013.

Ministry for Primary Industry Nathan Guy says the SFF has paid $150m to date to the 1000 SFF projects.

“The SFF supports the primary sector’s forward thinking and Kiwi ingenuity, which in turn helps keeps NZ ahead of the game.

“1000 projects have now been funded since the fund was initiated in 2000 -- about $150m in government funding and significant sector support.

“The fund has supported projects as diverse as reducing nutrient run-off from lowland farms, reducing use of antimicrobials when managing mastitis, and increasing the market share for NZ olive oil.”