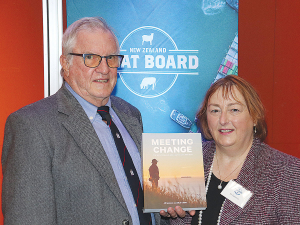 What is special about this book is, while there is serious detail for those who have been part of the meat industry in this period, the writing style and layout make it easily readable for those with limited knowledge of the sector. I especially like the profiles of key individuals scattered throughout the book, which gives the reader time to catch their breath before embedding on the next chapter.

One clearly gets the impression of the complexity, nuances and divisions in farmer politics, which make the intrigue in national politics pale into insignificance. A picture of the shakers and movers emerge - the likes of Mike Petersen, Jeff Grant, Owen Poole, Keith Cooper to name but a few.

Then we have the various chairmen such as James Parson and now Andrew Morrison and Bill Falconer and John Loughlin from MIA. Special mention must be made of John Acland for his role in helping to resurrect the Ahuwhenua Trophy competition. The list of the names of people is seemingly endless.

There are some nice touches on the people side, for example, special mention is made of Mary Malone a very dedicated, loyal and efficient administrator who was behind the scenes in the industry.

This book is one that I believe people will keep coming back to - a reference book if you like. It will provide for all those who follow in the footsteps of the people of the last two decades and a give a perspective of the past and where they come from.

It is also likely the book will job the memories of others who've been involved in the sector and perhaps prompt them to document their stories as well. Meeting Change is a must read and special congratulations to Ali Spencer and Mick Calder for what they have done.