TB on the decline, but outbreaks costly 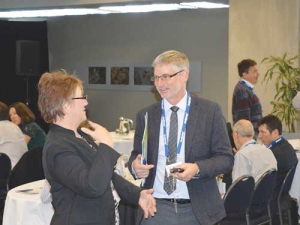 The stigma of bovine TB remains huge in rural communities despite a decline in the number of infected herds, says Stu Hutchings, group director of OSPRI.

Speaking at the recent Primary Industry Summit in Wellington, Hutchings noted the prevalence of TB was declining; there are only 49 affected herds around the country compared to 1700 in the 1970s.

However, having a TB outbreak in the herd brings huge social and financial impact on the farmer.

“The stigma of having TB now is huge especially in our rural communities,” he told the summit. There’s media attention to it and there’s been complacency among farmers about it. So, when it does occur, it becomes a significant event.”

OSPRI is using farmers to communicate to raise TB awareness in the sector, especially among younger farmers. At the same time it is using data collected by NAIT to good use, by tracking down infected animals and controlling TB.

OSPRI is made up of TBfree New Zealand, managing bovine TB, and NAIT, tracking movement of cattle and deer.

Hutchings says while the two organisations do different things, the primary objective is to protect and enhance the reputation of the primary industries and safeguard them from disease. OSPRI’s primary focus now is guarding against bovine TB.

Data collected by NAIT is use for tracing animal movements and managing TB.

Hutchings gave an example of a TB outbreak two years ago and how NAIT and TB Free worked together to contain it.

A cow with undetected TB was moved from Waikato to Northland; the cow had calved and was being milked. She suffered a severe TB infection after calving.

Hutchings says the farmer chose to use the infected cow as a milk supply for rearing all calves on the farm.  “So then we started to get a huge number of calves affected very early on in their life.”

The farmer then sold some of the calves to other Northland farmers; some were given away under the green trading process. This infected six more herds.

Hutchings says the ability to use NAIT, good investigative TB data and DNA analysis resulted in tracing the outbreak back to the cow. “We were able to patch the process together and resolve the case quickly and now all those herds have been cleared and the situation resolved.”

On a farm NAIT starts with the herd/farm manager’s registration. All cattle and deer are tagged with NAIT approved RFID ear tags; the tagged animals are then registered in the NAIT system. All animal movements are then recorded.

Hutchings says over the last three years 80,257 farmers have registered with NAIT; they recorded 1.6 million movements made up of 16.4 million animal movements.

For one week in March last year, 9761 movements – 165,000 animals – were recorded. In one year, a calf rearing herd in Waikato recorded moving its stock to 1686 locations.

Hutchings says the data shows the potential ramifications of any disease epidemic. “So, it’s very important for NAIT and TBfree to work together.”

NAIT’s three-year transition period, which ends July 1, is allowing farmers to get used to the concept of tagging all their animals and recording their movement.

“As we get to the end of the transition phase, we are looking at how to manage compliance and are working through an education process for farmers,” Hutchings says.