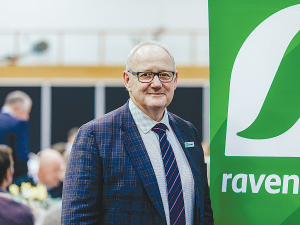 The results also include an underlying profit of $68 million in the core fertiliser business, before taxation and rebate.

Chairman, Bruce Wills called it one of Ravensdown’s “best ever results”, achieved in a year dominated by volatile pricing and global supply challenges.

Total fertiliser sold was slightly up at 1.22 million tonnes, and revenue at $922 million was up $210 million on last year, reflecting the rising price environment that dominated the year.

“The rapidly rising international prices makes fertiliser hard to budget for our farmers. To help them, Ravensdown focussed on product margins and yielded a FY22 group margin percentage lower than last year.”

Chief executive Garry Diack says Ravensdown’s fundamental belief is that this cash is better in use on-farm than in the company’s hands.

“Consistent with out cooperative values we have positioned the balance sheet for another challenging year in 2023 with $347M of stock in store – providing confidence to customers for spring.”

“The volatility of the market is not going away, and we need the capacity to capitalise on procurement pricing opportunities, and we need to continue investment in technological support to reduce New Zealand’s fertiliser footprint. The need for a capital buffer for the increasing risk a cooperative structure faces, compels a conservative approach to shareholder rebate for 2022,” says Diack.

Given this year’s performance and next year’s challenges, a shareholder rebate of $25 per tonne has been declared.

The year at a glance

SIDE 2022 will offer a wide range of workshops which provide practical solutions to farming challenges and help farmers taking advantage of a rapidly changing farming environment.