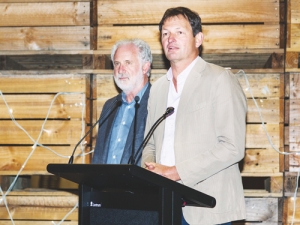 WineWorks MD Tim Nowell-Usticke (right) and Chairman Lyn Williams at the opening of the new warehouse.

The premise behind WineWorks, a contract bottling line and warehouse, was to bring business back to the regions.

That was 20 years ago and managing director Tim Nowell-Usticke says the plan has been more than successful.

The company which celebrated the two decade milestone in November, did so in style, by opening a new warehouse in Marlborough that brings pallet storage up to nearly 66,000.

"Lots of people say to us, that it's fantastic what we have done, that we must be proud. But it's not us, it's the wineries who have undertaken the growth. We just supply what the industry needs."

While the first bottling plant was in Hawke's Bay, opened in 1995, it was three years before they opened the Marlborough plant. Back then the Bay was producing more wine than Marlborough, which Tim describes as a "tiny" slice of what the industry is now.

"But I could see that the exports were flying out of Marlborough and that Hawke's Bay was more geared to domestic consumption. The growth is always going to be in export."

Given he had seen regions losing business infrastructure, he felt strongly about establishing his new bottling line in the heart of the industry itself.

"For years I had noticed that industry was being stripped out of the regions. It was moving to Auckland, Sydney or Shanghai. I thought to myself that it doesn't have to be like this. I knew that the real value increase happens when you turn a crop into a packaged item. For example, NZW stats show that export bulk wine in the last 12 months got $3.91 a litre. But if you export packaged wine, you get $8.57 a litre. So it's a multiple of value increases and that value increase happens in the regions."

Being in the heart of it, also allows wineries to have day to day contact with those handling their wine.

"Rather than sending it somewhere else in the world, where the wineries don't know what is happening with their product."

It also means more employment for those regions, with everything from forklift drivers, logistics, middle and warehouse managers finding work. In fact the new warehouse means a further 14 jobs in Marlborough.

Coinciding with the warehouse opening, WineWorks were presented with a gift of early Maori and Moa artefacts by the local Rangitane iwi. The artefacts were discovered during the excavation work of the warehouse and include a moa leg bone, a large adze (cutting tool) a moa oven and a hangi.

Being discovered on the site that houses the new warehouse, Tim says makes the site quite unique.