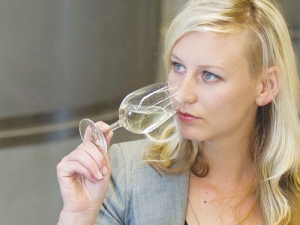 In 2006, her final degree year, Renee created a research poster which was displayed at the Romeo Bragato Conference staged at Napier’s Pettigrew Green Arena.

Earlier that year, the Aucklander’s month-long exchange trip to wine regions in Italy also gave her a taste for travel – she went on to work in wine regions throughout the world, including Hawke’s Bay, Waiheke, the Napa Valley and Australia’s Yarra Valley.

Renee has shaped an interesting career since graduating in 2007.  The Winery Doors poster series produced by the EIT valedictorian features photographs she has taken of cellar doors nationwide.

In 2010, Renee created a blend for a client which is now served at the White House.  In 2013, she was contracted to produce premium wine for export to the UK under M-Wines.  Several years ago, she established her own brand, Moi Wines.

Renee says her inner traveller is tamed “for now” as she puts her skills to good use at Wineworks.

“Working with grapes, the yeast, the wine, is where I feel at home, no matter where I am in the world.” ν\

The premise behind WineWorks, a contract bottling line and warehouse, was to bring business back to the regions.

Drones may soon be joining the armoury of weapons used to scare birds away from ripening grapes  after a trial undertaken in Hawke's Bay last season.

An EIT foursome have achieved a first as the only students to win gold in New Zealand's Bragato Wine Awards.

This year’s Romeo Bragato Wine Awards will be different to those in the past, with the awards split into two sections.

A 19-year soil monitoring programme in Marlborough is showing viticultural use is leading to more compact soils, increased nutrient loss…