The love of a Valli 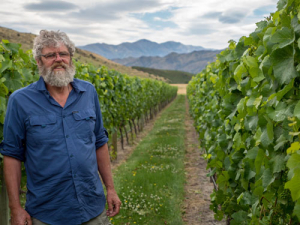 Grant Taylor, who says; “When the Waitaki fruit comes into the winery, you have to wipe your brain and pretend that the harvest is starting again, it bares barely any resemblance to any factors that we have employed to process the Central grapes.”

When Grant Taylor casually agreed to discuss his wine endeavours, it came with the proviso... I needed to take a drive with him and conduct the interview as we travelled.

Figuring that this was as good an opportunity as any and a pretty novel way to pick Grant’s brain, I jumped aboard his ute and we set off. Perhaps we’d be off to the Gibbston, Bendigo or even a round trip taking in Bannockburn? Nope, Grant had only one region that be was itching to get to, and that was way over the Lindis Pass. It seems that you can take a boy out of the Waitaki, but not the Waitaki out of the boy.

Born in Kurow, Grant Taylor’s fascination with the Waitaki Valley has never waned. In many respects, he sees his involvement with the valley as being a natural progression from his formative years making wine in the USA, Australia and France through to getting started in the Gibbston Valley and then encompassing other sub-regions within Central Otago.

“I came back to Central in 93 and I guess there were 40 acres of grapes and now there is more than 5000, so over that time, I have had a chance to appreciate how different parts of Central Otago work. From a winemaker’s perspective, it’s not something that you might ever get the chance to do. It’s like being the first man on the moon and then I get the chance to do that all again in the Waitaki which is pretty special.”

The great thing about conducting an interview in Taylor’s vehicle, is the lack of distraction from the winery and two and a half hours to think of questions related to wine in the Waitaki Valley. The history of the valley and grapes is well documented online for anyone curious to know more, so rather than turn this into a history lesson, I’m keen to tap into Taylor’s enthusiasm for the region, especially as we spot Kurow on the road sign leaving Omarama.

“Well, when we first purchased grapes from the Waitaki in 2004,” says Taylor, “I instantly realised how different they were from Central. What people were saying back then about the Waitaki was what people said about Central when we got underway. I firmly believe that the best wines are made on the edge and that is where you want to be. Central Otago is no longer on the edge, we might have been in the very early days with young vines and poor clones, but now we have people picking in the Cromwell basin in the middle of March...that’s far from the edge, even Gibbston isn’t on the edge like the Waitaki.

“Originally the Waitaki was an interesting side-line that I was keen to discover more about, but now there is a real energy that will probably keep me alive for another 50 years. It’s like anything, you need a change to refresh you, a new challenge to explore. People have holiday homes by the beach but coming over here to the Waitaki is like that to me...even though the girlfriend won’t think it’s much of a holiday.”

Approaching the Aviemore Dam as we descend into the valley, Taylor is waving an arm about pointing out some distinctive features of the area. Having made wine from 11 different sites in the area, his knowledge of the different geological features and climatic conditions is very handy.

“The area above the dam is a little bit warmer because it has a higher elevation which would normally mean cooler, but in the case of the Waitaki, the cool easterly breezes and fog that come into the valley never get high enough to get up here. I have been getting fruit from two sites above the dam, so I know how different it is from the stuff below.”

Driving past the cute tasting room at Bobbing Creek vineyard, it’s hard not to notice the number of bicycles out and about. The Alps to Ocean cycle trail rolls right through here, and initiatives like this have certainly created a buzz about Kurow. Taylor is also keen to point out that the great cycling weather has also been great for grapes from the valley.

“This year I have been fielding calls from wineries looking for Waitaki fruit which is unheard of. They want something with acid and energy, and with the rest of the country being hot as hell, there is going to be a lot of over-ripe flat wines out there. It’s a real shame that it didn’t happen four to five years ago, before vines got pulled out to make way for commercial grazing.”

As we turn off State Highway 83 into the aptly named ‘Grant Road’, Taylor’s enthusiasm for the region is brimming over and I figure that it might be time to get out of the vehicle and up close and personal with some vines...but not before Taylor drives us to the end of the rood to meet another Waitaki Wine personality

Life amongst the Waitaki vines evidentially suits Harrop and his family who moved into the area to pursue wine. After most of the early pioneers packed their bags and many pulled their grapes, Harrop grins when he talks about making a go of it in the Waitaki Valley.

“We came back to New Zealand (from Europe and Asia) and wanted to live in the countryside and the opportunity to get involved with the development here was exciting, especially the challenge of doing something new, though I honestly didn’t know what I was getting myself involved with. The hardest thing was living with the expectation that this was going to be a new boom area. It’s a difficult place to make it work commercially, I don’t think anyone would want to do a time and cost analysis, as it would be pretty hard to justify what we spend and what time we put into our vines.”

These days, Harrop and his wife Fenella are capitalising on the growth of tourism in the district by offering boutique accommodation to guests who also get to sample the wine produced from their special home block Sublime Vineyard. As much as I would love to sit on the porch with a glass of their Pinot and strum a rare Gibson guitar from Steve’s studio collection, the last stop on our magical mystery tour beckons. Six months ago, Taylor took the plunge and purchased land with vines already planted and managed.

“I realised that the amount of grapes that I could buy from here is always limited and every year we sell out of Waitaki Pinot and Riesling, so I needed to guarantee a source of fruit. This four hectare parcel of land will give us eight or 10 tonne of Pinot Noir and five or six tonne of Riesling. It was planted 12 years ago, so I am planning to do a wee bit of replanting here. There is a small amount of Pinot Gris that could make way for Chardonnay, as it was making wine from Waitaki Chardonnay grapes in 2015 that actually pushed me over the edge to buy this land. When people tasting that wine blind think it is a white Burgundy, there was no question... this is where we need to be.”

Walking amongst the very healthy rows of Pinot Noir, Gris, Riesling and Chardonnay, it’s hard to get Taylor to stop and answer any questions as he tears about dropping shoulders and plucking leaves. Gesticulating at the noticeably smaller berries to those in Central, Taylor ruminates on how having lighter bunches isn’t any impediment to production, it just required a change in vineyard management. Now, they double up on the amount of bunches they were getting by laying down extra canes.

“When the Waitaki fruit comes into the winery, you have to wipe your brain and pretend that the harvest is starting again, it bares barely any resemblance to any factors that we have employed to process the Central grapes.

“The skins are noticeably thinner too, but there is great acid and length of flavour. We might pick here a month after Central Otago, but the grapes are ripe and there is nothing green about the tannins.”

Admiring the limestone hill at the rear of the vineyard and the rocks thrown up from an old riverbed that was once here, Taylor drops all technical talk and gazes wistfully over the latest addition to the Valli portfolio.

“I have made some wine from this block before, but the grapes were never properly managed. So this year the simplest way to describe the feeling, is that it will be kind of like getting ready to go on a date with the most beautiful woman that you have ever seen, and you are excited as you haven’t slept with her yet, but you know it is going to happen. That is what this harvest feels like.”

Leaving Kurow, I doubt I will ever look at the valley and the wine produced here the same way again. For Grant Taylor though, there is a real sense that he is fulfilling some sort of destiny.

“I don’t really know what the purpose of life is or whether anybody does, but I feel like this journey is closing the loop. I was born in room seven at Whalan lodge in Kurow which was a hospital ,and now... it’s an old folks home...so can you see where this is ending. I might go out the exact same spot I came in. I don’t know many people who can do that”.