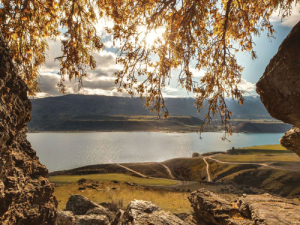 The London-based Lloyd family fell in love with the “almost other-worldly beauty and unpretentious quality of the land and lifestyle” and purchased outright the 88 hectare tract of land - which was being sold as five lifestyle blocks (house sites included) - with the vision of developing a single vineyard.

Winemaker/general manager Dave Sutton says the Lloyd’s venture is quite possibly the last of the big grape developments in the Cromwell basin, where booming cherry plantings and housing are competing for a limited supply of suitable land.

“The thing is we’re running out of vineyard land in Central Otago… because of the battle with cherries.”

Two years ago Sutton moved from his winemaker position at Vinpro to oversee the new development and make wines for Te Kano Estate which comprises the Northburn property and two other established vineyards of five hectares each.  The inaugural 2017 release included a Blanc de Noir, Rosé and Pinot Gris, and Pinot Noir with fruit grown in the Te Kano Estate, Jerome and Eliza vineyards at Bannockburn.

Sutton says winemakers need a good grounding in viticulture to “get it,” and is inspired by the owners’ philosophy of sustainability, and the considered approach of staggering plantings to give time to learn about the site and find the potential of the special and varied vineyard terroirs.

Subsoil mapping and a tailored irrigation system allows each parcel to be treated individually to “give each part of the vineyard the chance to do the best it can…. otherwise you are managing for the 80 percent,” says Sutton.

Viticulturist Mike Winter likewise brings a wealth of knowledge and passion for organic viticulture to the team, and sees himself as a custodian of the land rather than a vineyard manager.

Twenty-five hectares were planted over the 2016 and 2017 planting seasons, with another seven hectares going in this year where previously cover crops have been building up soil organic matter.

Sutton expects the terraces comprising schisty soils reflecting radiant heat will make “smashing whites,” – especially Chardonnay and Pinot Gris - while the deeper soils have as much as possible been selected for extended ripening for growing Pinot Noir. “I think the Northburn site will produce incredibly good grapes.”

Thoughtful planning has involved marrying of clonal selections to soil type
and aspect, and where clones cross over soil types the irrigation blocks have been split to accommodate different needs.

Comprising five sizeable and distinct glacial terraces, the vineyard is dissected by several steep gullies, and is divided into some 40 irrigation zones, with water pumped to the top of the property from Lake Dunstan and then gravity-fed from a tank farm into the low maintenance irrigation system.  The property rises over 110 metres from the bottom of the site to an elevation of 328 metres at the top….. It is at times “hellaciously windy,” says Sutton, and more than 2000 shelterbelt trees have been planted.

The western slopes of Northburn Station are some of the driest in this country, according to the NIWA and are the furthest inland that you can get anywhere in New Zealand.   Average rainfall is just 300mm.  Originally an outstation of the vast Morvern Hills Station in the 1850s, and farmed extensively for over 150 years, the property also has a rich goldmining history which has left a legacy of water races, stacked stone, and distinctive historic ‘herringbone’ stone tailings.

Sutton says a full archaeological assessment was carried out and sites of significance on the property identified to preserve their historical integrity.

Wilding pine control specialists were employed to hand-clear sweet-briar from gullies and an intensive native regeneration project has begun with more than 3000 eco-sourced native trees and shrubs planted to date, with advice provided by Jo Wakelin from the Otago Polytechnic.

Many more are being propagated on-site at Northburn’s nursery including some 1000 Kowhai seedlings raised from the “Old Man” mother tree source which will in springtime swathe the dry gullies in gold and provide habitat for native birds.Ultimately Sutton sees huge potential for public enjoyment of the property, being mindful of managing the working vineyard.  “There are so many magical parts…gullies, the tailings, revegetated areas… its going to be beautiful.”

“This is a one-hundred-year project, not just making a quick buck,” says Sutton.