Scott Base: The pinot project 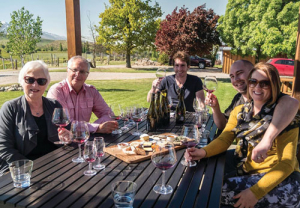 “You can’t buy this experience,” shouts Ross Anderson across the table. “You just can’t put a price on it. Getting a few hours with a winemaker to share his knowledge is amazing.”

Along with his wife Janet, The Christchurch couple are joined by Tui Fleming and her husband Hamish Drury from Auckland. The four won a competition called ‘The Pinot Project’ run by Allan Scott Family Estate under the banner of their Central Otago Scott Base label.

The brainchild of winemaker-turned beer maverick Josh Scott; “All the good ideas I claim, all the bad ideas I attribute to someone else”, the Pinot Project is an innovative way for the winery to interact with their customer base and get the word of mouth machine cranked into overdrive.

“After speaking with some of our customers, certain wine information that I thought was elementary, was actually a bit of a mystique for people” says Josh.

“I love talking to people and educating them, and Dad’s philosophy has always been geared towards direct marketing. He would say that ‘each of these people here will talk to 10 friends and that is 40 people that you reach straight away’. That word of mouth advertising is usually the best and this sort of marketing has worked really well for the way that we promote Allan Scott wines.”

The competition concept is totally tailored to bringing ordinary wine consuming customers into the fold by demystifying an aspect of the winemaking process. Sold in four bottle lots, each ‘Pinot Project Case’ contains a selection of wines from the Scott Base vineyard. Three of the bottles are individual clones (5 / 10-5 and 777) while the fourth bottle is the Scott Base Reserve Pinot Noir.

The objective is relatively straight-forward.  In the comfort of your home and quite possibly with the company of friends, you need to create a unique blend that then gets submitted to the wine-making team at Allan Scott Family Estate. They will then replicate the blends and the top two entrants will win a trip to the Scott Base vineyard to blend a wine with Josh from the 2016 Vintage. It’s a wonder the idea hasn’t been seized before now, something that Scott thinks is possibly due to the wine community being a few steps behind the craft beer community in terms of finding innovative ways to interact with their customers.

“Getting people interactive is key and one thing that craft brewers around the world have done really well, is using social media to talk with their customers. Wine hasn’t really grasped it in the same way to be fair. We are not great on social media yet, but I’m all about new product development and doing things different, and I’m not really a traditionalist, so we found that this approach was far more beneficial for feedback and learning what works and what doesn’t. We can also get across a message about our brand and our family which is really important to us.”

As the various glasses get swirled, sniffed, quaffed and in some cases emptied onto the lawn behind, the conversation starts to get rowdy with cries of: “number two…no number five…hang on…what number are we on now…I like the peppery notes of this one.”

To be fair to the four novice wine tasters assisting Josh with today’s blending endeavours, they are now on the fifth blend of the afternoon and not all of them have quite mastered the art of using a spittoon. However, what they are engaging in is precisely what Scott thought of when coming up with the Pinot project.

“It’s about sharing our personal passion with people and yes, it is labour intensive, but I don’t think it’s any different than doing a tasting.  Just last week I was doing a tasting in New York that to be honest was a bit of a waste of time as there were maybe 200 winery distributers there and I probably got to speak with 20 people all day. Whereas with this, I am really engaging with people. Our philosophy has changed. We used to chase volume, we used to chase case numbers, but we worked out that this isn’t the way. It’s actually all about quality and value. I actually know the vines and the contour of the land, so I love being able to share that knowledge with our customers.”

While Josh Scott’s name is now synonymous with craft beer and the rapid rise of his flagship label MOA, Scott is keen to emphasise that wine is still very much a focus for him and so is Central Otago.

“Ironically when Dad was starting out as a viticultural consultant he told people that you couldn’t grow grapes down here, and now we have our own place in Cromwell.  There is something about Central Otago Pinot Noir that is a really good talking point. When I am talking at wine events overseas, everyone talks about Marlborough Sauvignon Blanc, but they are intrigued by Central Otago Pinot Noir. Hopefully we will acquire more land here, but it is just about finding the spots. I really like this Cromwell area, it’s the one I feel most comfortable with. Buying fruit here is so expensive, but we know that we could sell a lot more Pinot so getting another vineyard down here is a definite goal for us.”

In an increasingly self-absorbed existence where we become slaves to ‘smart’ devices, perhaps a marketing scenario that encourages interaction, group participation and the kiwi love of sport could be a stroke of genius. Especially if the feedback from the four participants today is anything to go by.

“It has been awesome listening to Josh, because we have been drinking wine for years and have a bit of a cellar, but today we have learned just how much we didn’t know. It has been really educational,” says Tui Fleming. “Having an insight and understanding of the process that goes into blending Pinot Noir will certainly make me look at wine differently when purchasing.”

Just after wrapping up the blending session, Josh is positively brimming with enthusiasm for the potential for this initiative, even if he did surprise his marketing team with how quick they needed to act on it.

“I am the sort of person that if I have an idea I want to have it out there tomorrow, which frustrated our marketing and distribution people. Look it worked really well straight out of the gate as we got a couple of hundred entries, but I have a few ideas to make the next version of it even better. Perhaps we could do it with other varieties and incorporate Marlborough.  The great thing is, that it gets away from all those things you shouldn’t talk about around a table like religion and politics. The feedback we had from the winners and some from those who entered, was that they spent a couple of hours enjoying themselves, talking about wine and educating themselves in the process.”