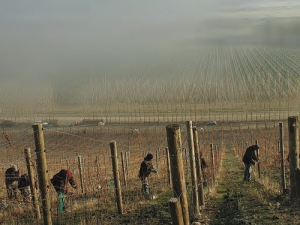 A lack of a reliable workforce and accommodation to house them is stymieing the growth in Central Otago. Photo: Quartz Reed, supplied by NZW.

While Marlborough is set to expand its vineyard production by 24 percent in the next four years, Central Otago's growth is expected to be far more modest.

But the issues of worker numbers and accommodation for those workers is as much a problem further south as it is deemed to be in Marlborough.

Those are just some of the findings to come out of a labour market survey conducted within Central early last year. Commissioned by the Central Otago Labour Market Governance Group, the survey was also supported by the Central Otago District Council, Ministry of Social Development, Seasonal Solutions Cooperative and industry bodies. President of the Central Otago Winemaker's Association James Dicey, says the survey has highlighted the areas that are holding the industry back. It has also highlighted the need for a collaborative effort to be undertaken between the industry and central government, as well as local government.

• Jobseekers referred by Work and Income – 1%

"The large number of backpackers employed provides a high level of risk," he says. "Back in 2008 we couldn't find backpackers, last year we had plenty. And then there is the issue of how long they stay with you. It takes a certain length of time before they become efficient and can perform the work. Then they move on. Trying to run a business on that basis is very challenging."

The RSE workers, as in Marlborough, are greatly appreciated with anecdotal evidence that they have contributed significantly to an overall increase in productivity in the region. But just as in Marlborough, caps on RSE numbers mean employers have to look elsewhere for casual labour.

Trying to work within the government's plan of employing locals is also not the answer for places such as Central Otago and Marlborough Dicey explains.

"Labour and unemployment rates are viewed at a national level, rather than viewed on a regional or sub regional basis. Central Otago and Marlborough don't have a large population base in a city that is accessible to us. We are not an Auckland, we are not Christchurch, we are not Wellington or Hawke's Bay with significant towns available. We are in a labour shortage down here."

In a recent work drive 40 Kiwis were taken on by the industry in Central.

"Two have stayed," Dicey says. "It is worse than that when you consider they (Work and Income NZ) interviewed close to 1500 people to be able to find 40. So basically we have ended up with two out of 1500."

So trying to find Kiwi workers to fill the gaps, is not an easy task. And even if they could find them, Dicey says the next major issue is finding housing to accommodate them. Sections in the Cromwell area are extremely scarce and those that are available are commanding very high prices. Dicey says a Cromwell section on average has gone from $120,000 to $180,000 in just six months.

"There is no accommodation to find in the first place and if there is something, a person on the living Kiwi wage could not afford it. And there is no affordable land available for developers to build accommodation."

So what are the answers? Dicey says a collaborative approach is necessary.

"We need to work with the government of the day and create a model that works and moves away from a very political cap. That cap is just a hard number and it is not necessarily based on the government's position of being able to support growth."

The second partnership that must be developed is with local district councils.

"We need to solve the accommodation issues that both the Marlborough District Council and the Central Otago District Council face at the moment. We need to create a strategy where we are able to work to provide affordable accommodation, for Kiwis in particular. You don't want to get into the situation where there are 24 backpackers in a house, which has happened in Queenstown in the past. That does nothing for New Zealand Inc's reputation."

Ensuring that accommodation doesn't turn into an urban ghetto is also vital. While it needs to be affordable, it also needs to be able to sustain growth.

"If those two things are done, we have a pathway forward. But that is going to require quite a change in philosophy."

• A total of 93 surveys were mailed out as well.

• The response represents approximately 79% of the total hectares in Central Otago.

• Accommodation wise, another 300 beds are estimated to be required by 2018/19. This is not only short term accommodation, but also permanent for Kiwi workers. The report states. "One of the contractors spoken to said he was losing the ability to employ these workers because he is unable to accommodate them."

• There is a need for more short term Polytechnic or such courses to increase the level of skilled workers.