Led by the heart 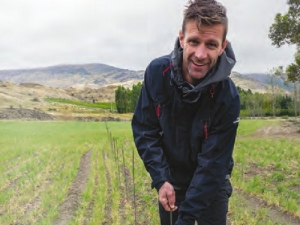 Viticultural consultant Jared Connolly, marks out the rows of the luna Vineyard.

Displaying the motto 'to struggle through adversity makes success so much sweeter' on their website, Kalex wines sense a distinct parallel between owner Alex Kaufman's will to survive, and the challenging task of farming grapes in Central Otago.

From fleeing the holocaust to becoming the embodiment of the American Dream, Alex Kaufman's story is pretty remarkable. It's the kind of tale that would make a great Hollywood script. Now 90-years-old, the Polish-American who arrived in the US with just a quarter in his pocket, is now the proud owner of a couple of select Central Otago sites. None more so than the recent development of 3.5 hectares on Felton Road for what will become Kalex Wines' Luna Vineyard.

American wine critic James Suckling wrote; "if Central Otago was the Côte de Nuits, then Bannockburn would likely be Vosne-Romanée", and it's for this reason that Alex Kaufman's daughter Irene is so excited to talk about their latest investment in Central Otago and her father's legacy.

"Not only did my dad end up owning the same chemical company where he started washing test tubes for a penny a tube, but he invented an additive to allow jets to fly as high as they do today. He really is an amazing guy with a brilliant mind for business in general."

Partnering her farther in the wine venture, which she stresses is very much a team effort with the personnel on the ground in New Zealand, Irene explains a little about her father's fondness for Central Otago.

"When he retired he was almost 80 and couldn't stand the idea of not having a business. While on a holiday to visit a friend who lived in New Zealand, he just fell in love with it and decided to have a go at starting a vineyard. I think he sensed that it was a place where anything was possible, the way the States first felt to him when he came here. It certainly re-ignited something in him".

As Alex Kaufman's friend lived in the Gibbston Valley, that was where he purchased adjoining blocks of land. One was to grow grapes on and the other to build a house on. The house never eventuated and they have been making wine from the grapes grown on the land ever since.

Consultant viticulturist Jared Connolly is someone that Irene Kaufman mentions has been instrumental in improving the quality of the site in the Gibbston and is now overseeing the 'Luna' vineyard.

"It's been nice for me to learn another approach to the wine business," says Connolly. "To see a relatively small producer connect with growers, source grapes from different locations and still be really committed to quality and great wine is great."

The Luna vineyard, named for Irene's mother's nickname, is situated on a 3.5 ha site at the corner of Felton and Bannockburn Roads. In such an illustrious location, Connolly even seems a little surprised that he now gets to work his craft on it.

"When this property went on the market in early 2014, I visited the site with Peter Waters, the General Manager and Theo Coles, the winemaker. We all agreed pretty much straight away, that it seemed like a real bargain. I have been in Central Otago for 16 years and even when I arrived, Bannockburn and Felton Road in-particular were more well known internationally for Pinot Noir and great wine than even Central Otago itself."

So other than a great post code and positive press, Jared's expectations for the site are firmly grounded in what he is standing on.

"It's the soil, it's the clay and the warmth. Primarily we looked at the soil maps and we were aware that there was a healthy mix of soil types, a good section of clay and gravel as well. We dug 12 soil pits and tested subsoils and top soils to assure ourselves we had the foundation to create great wine."

Transforming a barren piece of land in what is essentially a desert, is an important component for starting off on the right foot, something that Connolly is in the midst of at the moment.

"We've applied some rock minerals and sown some green crops to protect the soil and add some organic matter back. We are also busy making compost which will be applied ahead of planting. We've just imported 28 tonnes of organically certified cow manure to help with the compost. So broadly speaking it will be an organic, biological approach to the viticulture, without getting too hung up on any terminology"

By the time this goes to print, all of the rows will have been marked out and the posts driven in. Over winter, all the irrigation and frost fighting infrastructure will be installed so that next spring everything will be ready to go with the plan to plant their initial 2.5 hectare block of Pinot Noir in October.

"Our rows will be 2 metres apart with 80 cm's between vines. Relatively high density and we'll work really hard in the first three years to build a trunk and set up the form and strength of the plant and in the early days we'll stick to one arm and we will just take our time to figure out if we'll remain one arm, or will we be cordon with spurs or will we be cane. We'll just ride that out to see what we learn from the property, how the plants perform. That is the fun part."

Nearly 15,000 kilometres away in New York, Irene Kaufman is taking a keen interest in the progress of the Luna vineyard. She is also keen to point out that while Kalex owes a lot to her father's story, it's Alex's philosophy that matters most.

"If you are going to do something, do it right. The site is really exciting because it says everything about why my father wants to do this, to create a beautiful glass of wine. People will ultimately judge us on whether the wine is any good, and we purchased the Luna block with a commitment to making a truly great set of wines out of this location.

"As an American owner and speaking on behalf of my father, we are both honoured to be part of the wine industry in New Zealand. It is an impressive group of people that is led with heart and we are very grateful to be part of that adventure."

Viticultural consultant Jared Connolly, marks out the rows of the luna Vineyard.

A beautiful site, that has inspired Americans Alex and Iren Kauffman.