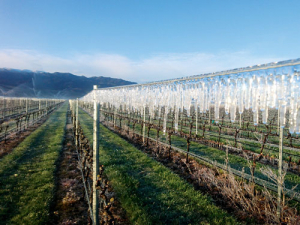 Whilst the full extent of damage won’t be determined until post-flowering and fruit set in early December, Dicey says looking back a month later it appeared early estimates held true that the region had suffered “variable” damage across about 5-10% of its vineyard area.

“It’s too early in the season to determine crop losses, but one of the things acting in our favour is that because of the amazing year we had last year we have a lot of inflorescences. If we get a good run through flowering and fruit set, we may not notice any drop in yield across the region,” he said.

Bleary-eyed grape growers recovering from the record long night of frost-fighting on October 12/13 were soon comparing notes on how their vineyards had fared, with some normally “frost-free” sites incurring shoot damage, and some newer plantings with vines still in bags being described as “nuked.”

Some individuals had suffered a “devastating blow” with 60 to 70 percent damage, said Dicey.  Mostly this occurred where water systems failed due to temperatures dropping below their design capacity.  “When a water frost-fighting system fails, the results are catastrophic.”

As predicted the storm weather cleared by nightfall on Friday and frost alarms were going off by 9pm.

An earlier than normal bud burst had left vines vulnerable when the dry air combined with low temperatures and dew points “well below minus 5 across parts of the region,” said Dicey, whose company Grape Vision manages a number of vineyards across all subregions of Central Otago.

He recorded temperatures of -4.7 deg C beneath a wind machine in the Gibbston Valley and suffered no damage.

Meanwhile growers using sprinklers had to be vigilant to get them going early enough and some systems struggled to keep up the volume of water needed to protect against the extreme cold.

Those looking forward to a hot shower and bed on Saturday morning had to delay for several more hours as a cloud layer quickly settled over the valleys, and water frost-fighting systems ran through in some cases until 11.30am.

A vast amount of ice was formed and some growers experienced ice build-up so heavy that shoots were ripped from vines.

However, given the extreme length and severity of cold overnight, the “relatively low” level of damage across the district as a whole could be attributed to unusually low levels of moisture in the air, as well as shoots having low water levels in their early growth stage. “The damage to cells was much lower compared to the normal types of frosts we experience.”

The conditions had “created a freeze event rather than a frost.”

Dicey said the freeze was a highly unusual, “once in multi-generational” event.“There’s people who have been farming here for 60 years and never experienced that level of cold in October.” Some orchardists in the region had also suffered severe crop losses, it was reported.

“You have to argue we are seeing more extremes in our climate, we certainly have in the last few years,” he said.