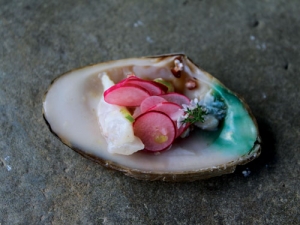 Waipara may have been suffering from one of the worst droughts in two decades, but it didn’t stop a foraging event that highlighted just how versatile the region is.

Driving in from the north, the effects of a dry summer are blatantly apparent. While initially it appears as though Stings renowned song Fields of Gold is a good description for the landscape, it quickly becomes obvious even that phrase is too generous. Instead the plains are bleached of life, reminding one of a golden beach or desert. The only relief on the horizon is the copses of trees and the luscious verdant greens of the vineyards dotted on the slopes and flat land.

What can there be to forage in a region as dry and over heated as this? I ask myself.

I quickly discover that there is plenty, regardless of the current conditions.

The North Canterbury Forage was the brainchild of seven local wineries, who are all practising what they are promoting. As organiser Angela Clifford from Tongue In Groove Wines told the international media who had been invited to take part in the day-long forage; “This is not a staged event – this is actually how we live.”

Held at the beginning of February, the promotional event was a one of a kind, that enthralled all who took part.

Gathering in the early hours at Pegasus Bay for breakfast, the media, a number of chefs and winery representatives were split into groups. Each group was tasked with foraging for different food items.

There was the seaside group – who managed to bring crayfish, paua, tua tuas, mussels and fish to the party. There was the hunting group, that despite spending a warm night on a high country property, didn’t actually manage to bring a deer home (thankfully though one had been caught a few days earlier). The roadside foragers picked elderberries, prickly pears (I now know why they have that name), wild parsley, plums and fennel. Other groups were tasked with foraging for vegetables, edible flowers, fruit, honey and truffles. Within six hours, an abundance of produce was brought back to Black Estate, where 10 chefs oohed and aahed, prior to coming up with a menu utilising the super fresh, foraged food items.

Which brings me to the point, that this was not a staged event. While it was a concerted and organised promotion, the foraging itself is something that many winemakers and growers do, on a regular basis. Visit the wineries themselves and you will see vegetable and herb gardens, providing a source of produce for their own restaurants, or their staff. Many of the vineyards are set among farms, which raise ducks, chickens, sheep and cows (often for milk).

Many are almost self-sustaining in terms of produce, with wild foraging adding the extras not grown at home.

That became obvious when the 10 chefs produced nine separate dishes, using only the products that had been sourced and collected during the forage itself. From lamb with lentils and truffles, through to tua tua, paua and pickled radish, each course was accompanied by a Waipara wine varietal. With close to 20 wines available for tasting, the evening gave the media along with the winery personnel a chance to truly appreciate the distinct link between Waipara food and Waipara wine.

Lochie MacGillivray says Hawke's Bay needs more rain in the next couple of weeks or there is a risk of the region slipping back into drought conditions.