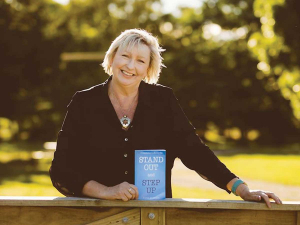 Fiona with her book Stand Out and Step Up.

Fenwick plays a key role in the Women in Wine Initiative. She spent her early years studying Political Studies and majoring in International Terrorism back at Aberdeen University.

Truth be told, she never actually got to put that particular degree to work, given she moved straight into public relations once her degree was completed. It’s a funny story really, as so many of Fenwick’s are. She was being interviewed by Procter and Gamble, suffering from “the most crashing hangover,” when she was asked if she was there for the public relations job. She blanched. She had in fact thought she was applying for a job in advertising.

“But I looked him in the eye and said yes I was. Then he asked me to talk to him about what public relations meant. I don’t think I had ever actually heard those two words put together until that moment. I knew public, I knew relations so I was willing my wine addled brain to figure out what to say and luckily came up with enough to satisfy them - or show I at least knew the value of spin.”

Long story short, she got the job. Which after three years led to her next career move – as director of communications for ICI, which was the largest chemical facility in Europe at the time. On call 24/7, she was responsible for dealing with the media and community regarding fatalities, fires, pollution, chemical industry issues and Greenpeace, whose members regularly chained themselves to the ICI buildings. Although a position of considerable influence, it wasn’t in the least bit glamorous she admits, especially given the relentlessness of some of the UK media at the time

When ICI began to divest of their assets, the company that had employed close to 100,000 people, downsized to just over 6000 employees during her time there. Fenwick chose to leave the company to get the flexible working she wanted to start her family. Her boss at the time, who she describes as her greatest mentor, was concerned that those taking over the assets would not look after the community as well as ICI did. “He was concerned that they had put years into being the backbone of the area and what would happen if they didn’t treat it the way we had over the years.”

Fenwick suggested she establish her own business and represent the new companies, which by the way included Enron, BP and Du Pont among many others. The Blue Sky project was born and Fenwick’s company Fiona Bell & Co (later to become @PR) came quickly into being.

Her boss had one caveat though – he wanted her to be the company’s representative on the Middlesbrough Football Club’s Executive Board. Given she knew nothing about football, Fenwick laughed at the suggestion – initially. “But then I thought about it and the next morning I phoned him and said, ‘why not, if you think I can do it, then I’m sure I can’.

“They had never seen a female in that Boardroom, they had certainly never seen a person of such tender years. But to be honest I didn’t factor either of those things in until I looked back years later - perhaps the innocence and arrogance of youth.”

She spent three years on the Executive, which she describes as “interesting, challenging and hugely exciting”, helping sign multimillion dollar players for the club. At the same time she was still running her company and was on call, all day and every day to deal with local, national and international media. Now she was not only getting calls (“just about always at 3am”), to put out fires for the chemical companies (often literally), she was also getting calls from the police station to rescue players who had got themselves into a little bit of trouble. “So I had a few visits to the cells and various other places. But thank goodness there was no social media back then, because we were able to keep things relatively contained.”

Balancing this, a young family and multiple other responsibilities, Fenwick was starting to yearn for new energy and opportunity -  tired of the never-ending on-call duties. She reached a life-changing decision, she wanted to live somewhere else and give her girls the chance to experience life in another country. Having visited a number of times – Aotearoa was her first choice. She arrived in her new home country the day the Twin Towers fell in New York - a sombre start but life affirming. She continued with her business from this part of the world for a while and then decided to sell. To keep active, she established an on-line company that imported party products - a completely new direction and fun for a while, but quickly realised that she missed the people contact. “I’m a communicator - always have been and always will be. I was working from home and I started losing a part of me and I knew my journey had so much more mileage in it.”

She began knocking on doors of people she had on her list of ‘people who need to know Fiona’, not asking for jobs or anything else, but looking to develop her nonexistent network in New Zealand and in doing this, letting key people know what skills she had to offer. Before she knew it, she was working with national sports organisations and major corporates, and advising leadership teams and Boards which then led to her being asked to do conference talks and media commentary on reputation management. However, as a result of people asking her for more help and guidance in their careers, she was asked to write a book about what she had learned during her career. In 2017 Stand Out and Step Up was released. It provides readers with sound guidelines on personal and professional communication strategies, effective implementation and successful management. All mentors and mentees in the Women in Wine programme receive a copy and are advised to read it to help themselves find their success.

From that grew a new business, ‘fifteenminutes’. “What I was finding is reputation management was at the core of all the leadership work I was doing. You could be fantastic at the work you do or the product you make, but if no one knows about it then you are unlikely to be as successful as you could be. Whether it was a major company in crisis, or a sportsperson trying to make the most of their short time at the top of their game - or even falling from grace - how you communicate your successes or failures is what can make all the difference to success.”

She based the business name on part of her favourite Andy Warhol saying; “In the future everyone will be world famous for fifteen minutes.” The business continues to take Fenwick all over New Zealand and overseas to work with companies and deliver conference keynotes and workshops.

Now based in Marlborough with a 9.5 ha property, 4.5 of which are planted in vines, Fenwick is an integral part of the Women in Wine programme, and is passionately proud to be. She helped establish the mentoring programme, drawing on her experience from establishing previous similar initiatives both in New Zealand and overseas, and from being both a longstanding mentor and mentee.

She helps select members of the wine industry to take part, both mentors and mentees and advises on matchings. Her past experience plays a big part. Not everybody is cut out to be a mentor. “Just because you have been in a particular business for a long time, doesn’t mean you are necessarily the right person. It’s the whole two ears and one mouth concept. You have to be able to listen and support in a way that doesn’t take over, doesn’t judge the mentee but helps them focus on what they need to do and be accountable for themselves.”

The success of the programme which is about to start its third year in 2020 speaks volumes for what this woman with a degree in international terrorism brings to the party.