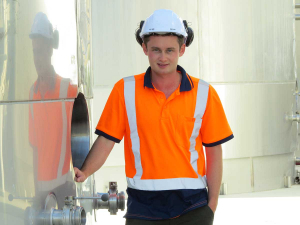 “For my fifth birthday I got my first John Deere tractor – a little ride on. It was quite exciting.”

So it’s hardly surprising that Pernod Ricard Winemakers’ 21-year-old cadet has relished working in Marlborough vineyards in the lead up to harvest. “It’s good getting in the old DX20 and going up and down the rows leaf plucking,” he says, eager as ever to get in a tractor. There’s “quite an art” to that job, he adds. “You have to position everything perfectly otherwise you destroy the grapes and it will really reduce yields coming into the winery.”

Matt has brought the same enthusiasm and dedication to his introduction to the winery, where he’s in the red receival area. “It’s awesome to come here and meet so many different people from so many different backgrounds,” he says, three days into his cellar work. “We all work together as a team to produce exceptional products.”

Matt has spent the past three years studying for his Bachelor of AgriCommerce at Massey University in Palmerston North, majoring in International Agri-business. Matt’s study didn’t involve viticulture components, but in his final year, he started looking to the opportunities in the viticulture sector. “I spent about five years part-time dairy farming and was keen to try something new.”

Wine is a booming industry, with opportunities from the field to finance, he says. “There’s so much growth and I am so fortunate to be part of Pernod Ricard Winemakers, because they are a huge, diverse and very innovative company.” Matt applied for the cadetship in September last year and started in November, as one of three cadets in Marlborough. So far the work has seen him work in the Brancott, Stoneleigh, Kaituna and Triplebank vineyards, getting a taste of everything from vine training and irrigation maintenance to leaf plucking and vineyard development. After vintage in the winery he’ll head back to the vineyards for winter work, and will also start work on the Primary ITO level 3 and 4 Viticulture units tied in with the cadetship.

Pernod Ricard Winemakers Operations Director Tony Robb says the company has around 100 extra people employed in the Marlborough winery for vintage this year, including the three cadets. While those numbers are fairly standard for harvest, the number of Kiwis training up for cellar work is unprecedented, he says.

“Historically we have struggled to recruit New Zealanders, but nearly half of our vintage uptake this year are Kiwis.”

The company always brings its cellar staff in early to prepare for vintage, with staggered starts for a multiday induction, he says.

“We bring them in tranches and pair them up with existing staff, many of whom came here originally for a vintage and subsequently joined our permanent team.”

Training up green hands is standard too, although they are often internationals who happen to be in the country when harvest rolls around. “While we do have a small core of experienced returnees, most years we are lucky to have 20 percent of people who come to the winery who have worked here before,” says Tony.

Pernod Ricard Winemakers invested more in recruitment for vintage 2021 than it has in the past and he wasn’t surprised that many New Zealanders left applying until “quite late in the piece”, because they were likely looking for full time work where they lived. However, for some working a vintage is something to “tick off the bucket list”, Tony says.

Meanwhile, some experienced international cellar hands, still in the country after the 2020 vintage, applied for work early, then shopped around for the best deal, knowing they’d be in high demand.

“Personally I’m really excited to see so many young Kiwis signing on. Hopefully this will be the start of a new career for many of them.”