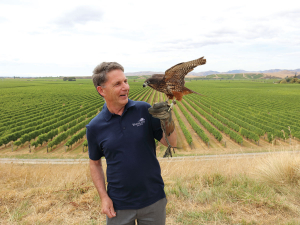 Andy Frost has spent nearly 40 years weaving science and research into the practical business of growing and making wine, with groundbreaking consequences for the wine industry.

"The term I have come to really like is 'the pursuit of technical excellence'," says the 2021 New Zealand Winegrowers fellow, whose work with Montana and then Pernod Ricard saw him play an integral role in wine research, including the multi-million-dollar Sauvignon Blanc programme that transformed the industry's understanding of its key export variety. The project "laid the foundation for New Zealand's reputation as having expertise with scientific knowledge, as well as expertise in growing the grapes and making the wine", he says.

Andy was also involved in the more recent Pinot Noir project - Breaking the quality productivity seesaw in wine grape production - was a lead science adviser for the scientific adviser for the scientific and technical research programmes in the New Zealand Lighter Wines initiative, and spent a decade on both the New Zealand Winegrowers research committee and the Marlborough Research Centre board. His drive for better wine science saw him involved in the design of the Bragato Research Institute research winery and its custom-design microfermentation tanks. Meanwhile Andy's passion for conversation is at play in the vines as well, as Chair of the Marlborough Falcon Conservation Trust and long-time member of the Marlborough Biodiversity Forum.

That illustrious and industrious wine journey began in 1982, when the just-graduated plant-ecologist applied for a role as trainee winemaker with Montana in Marlborough, where grapes were still pretty thin on the ground. He swatted up on cool climate winemaking, got the job, and within six years was responsible for the company's sparkling wines, including the beginning of a "wonderful" association with Deutz.

Andy also oversaw the development of Brancott's 'Letter' series of wines and produced a trophy-winning Chardonnay from hand-harvested and whole bunch pressed grapes, after lobbying for the chance to do so. By the early 1990s Andy was Senior Winemaker in Marlborough, responsible for a big chunck of New Zealand's leading wine export, Marlborough Sauvignon Blanc. Then in 1997, he was awarded White Winemaker of the Year at the International Wine Challenge in London.

In 2001, Andy became Montana's Research and Development and Technical Services Manager, as the company took a science-based approach to doing better, allowing him to indulge a passion for using knowledge to grow opportunities.

He's grateful to his "wonderful wife" Bev and three kids, who accepted that he'd disappear for nearly four months of every year, either through vintage or international travel. He's also "extremely grateful" that Montana, and then Pernod Ricard, adopted an "incredibly generous" approach to research, yielding gains for the company and the wider industry.

During the Sauvignon Blanc Project, Pernod Ricard had the "foresight" to realise the research provided a valuable foundation that they could build on, extending the trials and results to grow the company's understanding, giving them the ability to "dial up and down" flavour in Sauvignon Blanc naturally, says Andy.

That came down to tapping into Marlborough's natural attributes, the impact of viticultural management, the relationship between machine or hand harvesting and thiols, and the importance of yeast management. "We developed an understanding of those four areas and that put Pernod into a highly recognised leadership role in New Zealand and around the world," he says.

Research is expensive, but it's also an investment, "and you have to think carefully in and engage with people beyond your own circles," Andy says. "Whatever you do, you will never employ all the brightest people. If you want to do the best, you have to be partnering with the best." An open mind has been key to the success of New Zealand's research programme, along with research relationships around the world, he says. "I got a thrill out of engaging with the best people."

Andy left Pernod Ricard in late 2019, and these days consults to wine companies with a research focus, while spending more time indulging his love of conservation, including on the falcon trust, which breeds and rehabilitates kārearea.

Ask Andy his favourite wine, and you'll likely hear more about what the land was like, how it was managed, and how a conversation with a winemaker he respects revealed all the things they'd like to try next time to make it better. "That is the wine I most enjoy, because it's about the people and the knowledge and how they bring that together."

A few months after landing in New Zealand in 1985, Rudi Bauer felt disconnected and alone, homesick for the culture of Austria.

When Daniel Le Brun first visited Marlborough in 1978, he was "immediately convinced" the region had the potential for great wine.

NZW'S 2021 Fellows: John Clarke - for service to NZW and NZGGC

Driving a tractor up and down a vineyard gives you plenty of time to think, says Gisborne grape grower John Clarke, who's put that time to good use during 30 years of governance.