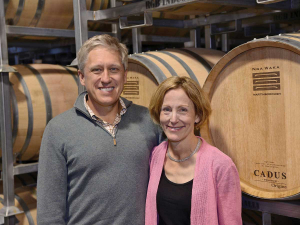 One of New Zealand’s smallest wineries is going through huge growth, thanks to its new North American owners.

Jay and Peggy are professionals with rural backgrounds and a desire to be involved in the work as well as the growth of the business, says Roger, who started Nga Waka in 1988 and has stayed on as winemaker.

“When Jay and Peg bought the place, they also bought the Croft Vineyard at Pirinoa, just south of Martinborough township… The whole idea was that we’d keep producing our 5000 cases for domestic consumption and that the new owners would set up an import company to feed wine into the United States.”

However, while shipping wine to the States is easy, establishing a market there is “a nightmare”, Roger says. “Because an importer can’t be a distributor and the structure of the distribution system in the US also makes it tough”. Despite these challenges, expansion plans have progressed, as have those for a new cellar door, set to open before the end of 2021.

The new owners grow grapes in California and coffee in Hawaii, with clashing harvests for the two crops, so one of their key drivers was to find a vineyard with a harvest that did not coincide. “They looked all around New Zealand and liked the great Pinot Noir from Martinborough and made contact with one of the local real estate agents,” says Roger.

One of the biggest changes at Nga Waka is replacing vines originally planted on their own roots in 1998. Some Pinot Noir was replanted in 2015 and is now into its third crop. Mendoza Chardonnay was also replanted with the relatively new 548. There is a small block of Riesling at the front of the winery, in a mixture of plantings, mostly on its own roots.

Riesling is the wine with which Parkinson has carved his name, but has always occupied the smallest part of the winery’s vineyard area. He typically makes a bone-dry Riesling with no residual sugar, modelled on the great Rieslings of South Australia. But in tough years he balances high acidity by allowing a small proportion of residual sugar; 5 grams at most.

“In a leaner year this helps to flesh out the wine a little.” His first Riesling vintage was 1993 and the most surprising was 1998, when it was as ‘hot as Hades’, but the wine has retained elegance, says Roger.

He also takes a less is more approach when it comes to oak in his Chardonnays and Pinot Noirs, in which he will typically use 20 to 25 percent new oak, and sometimes slightly more in his Lease Block Pinot Noir, due to the high quality and intensity of fruit from that leased vineyard. His approach to whole bunch fermentation is similar, with up to 10 percent “if the fruit is in really good condition”, and up to 20 percent on the lease block.

“We’ve been doing that for at least the last five years, and in some years I won’t do any.... All you end up with is overly structured wine without the fruit weight to carry it.”