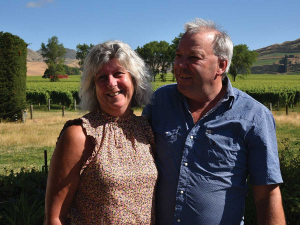 Not a day goes by that Awatere Valley grape grower Andy Peter doesn’t think fondly of his father, who firmly believed in succession.

John Peter had seen previous generations lose land and was determined to make up for that. “He spent his whole life wanting to settle his three sons onto farms. I remember him lining us up at the kitchen table and telling us how it would work.”

John worked tirelessly to develop profitable Marlborough farmland from rough country, including Alton Downs in the Awatere, where Andy and Michelle now live, and Cape Campbell, which Rob and Sally Peter farm. “They weren’t a challenge to him – he couldn’t afford good land so had to go with rough,” says Andy.

Naturally, Andy and his wife Michelle were always going to try and do the same for their three children, and grapes allowed it to happen. “It was always our dream,” says Michelle. “But we never thought it could work with sheep and beef.”

Angus was the first to come home, after spending 10 years away working, and today runs the sheep and beef operation. “He’s got a vision, has intensified, does it differently and is making more money than we ever did from it,” says Andy. “I try and keep out of his hair. My dad was never a guy who said ‘I told you so’ – he just quietly sowed the seeds and stood back.”

As viticulture took hold in the Awatere  the Peters realised their long-held dream of the property supporting the family was a reality. “The whole idea of our business was to make it a scale operation and we worked bloody hard to do that,” says Andy.

Last year, David took over the running of one of the vineyard blocks and is working towards his first harvest, while daughter Ashley has returned from the UK and bought a vineyard in the Lower Dashwood thanks to the help of her parents. Her Irish husband Chris works on the Peters’ vineyard, doing machinery work that was previously outsourced. “Grapes made the bucket big enough for it all to work,” says Andy.