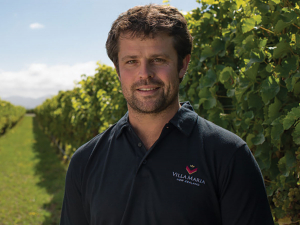 But the best-laid plans as the saying goes, saw Dudley change his career path at the age of 25 to the world of wine.

Now 11 years later, he is one of two New Zealanders to be shortlisted for inclusion in the new international Future 50 awards, launched by WSET and IWSC, as part of their respective 50th anniversary celebrations. Dudley and Nick Paulin (Central Otago) were among 600 nominations for the awards, which aim to unearth the wine industry’s up and coming talent on a global platform.

With no idea how many are on that shortlist, Dudley is also unsure of just where two viticulturists from New Zealand will fit into the picture.

“It is a global competition, and it is hard to know where New Zealand sits within that, and then where does viticulture sit within that?

For those who know Dudley, the accolade of becoming a finalist, is not surprising. The 36-year-old has been a force within the industry since he completed his degree back in 2006. His first viticultural job was with Delegat’s and within a year his boss Bala had promoted him to grower viticulturist. For someone of his age, it was a huge step forward, and not without its challenges. Especially as his first season in the role was 2008, a year when Marlborough’s yields blew out and created a number of issues for the industry overall.

“That was a challenging vintage in itself. Then we had two to three years of really changing the way people were growing grapes,” Dudley says. “Yield management became really important, and a lot more focus was placed on disease management and fruit quality. They were really good changes, but it placed some real pressures on the system.”

Being so young, when a lot of the growers he was dealing with had been involved in the industry for years, was another hurdle to overcome. He credits Bala with helping him to cope with the challenges.

“He would very much be one of my important mentors. Not only because of his knowledge around viticulture, but the way he deals with people. I learned probably as much on that side as I did viticulture.”

In 2011 he moved to Villa Maria, as Marlborough’s regional viticulturist. Again it was a huge step, one he says he felt out of his depth in, initially.

“I was going from a job where I had Bala as my boss and every now and then I had seasonal workers, to one where I suddenly had a staff of 25 and I was responsible for a region. I lost a lot of sleep.”

But again he had great mentors, Sir George Fistonich and Ollie Powrie, who gave him the wherewithall to do the job, learn and grow.

Looking back he says the need to challenge himself has helped form his personality.

“I like being challenged and think whether you are stepping outside of your comfort zone, by choice or by being pushed, it is good.”

He is an advocate of the importance the Young Viticulturist is to those coming into the industry. It provides a chance to be challenged, and to gain higher recognition.

“Winning both the young Vit and the Young Horticulturist were huge steps towards recognition, but they also broadened my horizons as to what the industry was and how big it was,” he says. “When I first started (competing) there had only been three years of the competition, so there wasn’t this long history of people who had been involved. Now though, you can see where people have ended up and there are some who have gone on to pretty high honours.”

Dudley is one of those. In his role as Deputy Chair of the board of Wine Marlborough, he is continuing to challenge himself.

“I have an urge to be a part of something that’s bigger than the workplace,” he says. “Being a part of an industry that is quite dynamic is very rewarding.

“The industry has changed since I began. In 2007 it was almost a golden age, Sauvignon Blanc was on the up, so it was so positive. It is still positive, but the industry is so much more mature now, there is a lot more structure to it and a lot of different players on a larger scale.”

As for the future, Dudley says finding the talented and educated people to make the industry even stronger is going to be one of the challenges ahead. “We have the site, we just need the people.”

Dudley and Paulin won’t know if they have made the final Future 50 until the organisers make the announcement in November this year. But being among the finalists is recognition of all they have achieved so far in their careers.