Forty years of wine and conservation at Ata Rangi 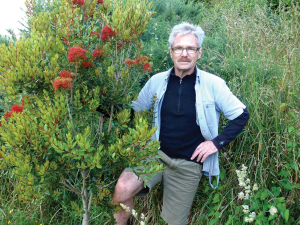 Balancing a life of wine with a passion for conservation comes naturally to Ata Rangi’s Clive Paton, who spends mornings at his Martinborough winery and afternoons in his native forest.

It’s been 40 years since Clive gave up sharemilking to plant 5 hectares of stony paddock in 1980. “I decided to buy a piece of land on the gravel terrace and to become a winemaker.” He was raising a daughter on his own, so couldn’t go away to study, but was in good company in the region, with four other Martinborough wine pioneers all learning on the ground, he says. “We all shared information and equipment until we got our own wineries.”

A few years later, Clive’s sister Alison bought a 2ha block adjoining his own, and the Pinot Noir plantings there helped forge Ata Rangi’s international reputation. But Clive had spent part time on his grandfather’s Waikato farm when he was growing up, surrounded by trees, and longed to get more than vine roots in the ground. “In town, I was at the point where I was needing to chop down trees in order to plant trees. So I began to search for a piece of land to cover with natives.”

He found it when looking at potential land for a vineyard expansion, and discovered 120ha of neglected bush at the back of the property. “Straightaway, I knew I wouldn’t find another piece of land like it so close to Martinborough,” says Clive of his beloved “bush block”, which has flourished over the past 18 years, thanks to fencing, pest control and planting. Clive and the Ata Rangi crew have planted around 75,000 trees, including 1,500 rātā. While the plantings are mostly native, there are also durable eucalypts and other timber species, which play a role in the sustainable management of Ata Rangi, he says.

If Pinot Noir is his wine of choice, it’s another red beauty that wins his heart in the bush. A few months after buying the property, a friend of Clive’s went up the ridge and discovered rātā, “which were thought to be totally extinct in the area”, Clive says, lamenting the devastation possums wreak on the species. “One day I went up there just before Christmas and the rātā were flowering. There would’ve been 500 tūī in there. It was like walking past the Cake Tin when there was a game on - a huge roar. It was incredible. So, I decided to propagate them and start planting through my areas.”

Clive soon joined forces with the Project Crimson Trust, which was founded in 1990 to protect and plant pōhutukawa and rātā, but now acts as champion for all native species. “The board from Project Crimson Trust came for a field day in around 2005, and I was so inspired by their work,” he says. “Some became very good friends. I’ve never looked back.” Conservation provokes a similar camaraderie to the Pinot industry, he says. “You have to be slightly crazy to be a Pinot Noir producer, and it links everybody. It’s the same in conservation. Once you know people are interested in the environment, you become friends pretty quickly.”

Ata Rangi’s “Crimson” is a younger vine Pinot Noir named for the trust and sold in support of its work. Ata Rangi has also supported Project Crimson’s Trees That Count project, with more than 350 native trees funded for planting groups across New Zealand. The cellar door and wines are also a valuable tool for inspiring others, says Clive. “We have a vehicle to have a bit of influence through Ata Rangi, with thousands of individual customers who’ve come across our love of rātā and pōhutukawa.” Many of them have left the cellar door with a baby rātā to plant. “It’s part of our marketing - but more than that, it’s who we are.”

Clive received the ONZM for his services to the environment in 2012 and the Loder Cup in 2014, but is far from done in his conservation work. The Aorangi Conservation Trust he founded looks after around 40,000 hectares behind his own bush block, and the Pūkaha to Kawakawa Alliance group he helped establish provides connectivity between organisations such as the Department of Conservation and Greater Wellington Regional Council, and works to secure funding for conservation work across the Wairarapa region.

“We’re not going to see the change in our lifetime, but we’re setting it up for our children and grandchildren to keep going,” he says. “It’s a multi-generational problem, and solution. We can never repair the damage done, but we can have a pretty good crack at making things a lot better, and at looking after what we have left.”

Winegrower takes an in depth look at how the season has gone for growers across the country.

After three decades of winemaking, Clive Paton says that he might have expected to see a few similarities in weather patterns from one year to the next, but he admits he hasn’t.

If pioneering one of New Zealand's most highly applauded Pinot Noirs is not enough of an achievement, Martinborough winemaker Clive Paton is now clocking up a string of environmental awards for his conservation work.