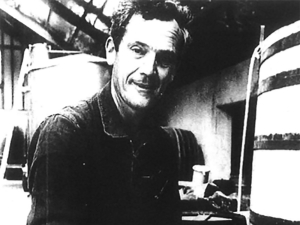 When Mission Winemaker Brother Stuart Cuttance, known to the industry as Brother John, died on 24 December last year, New Zealand lost one of its pioneering winemakers.

He was aged 95 and the oldest member of the Society of Mary religious order.

Born into an early settler family in the Haast region of the West Coast, Br John was educated at St Bede's College and went on to study at Pharmacy School in Wellington. When he joined the Society of Mary in 1954, with advanced knowledge of chemistry, he was appointed to the Mission in Hawke's Bay, where he became an understudy in the cellars to Br Basil Newman-Watt.

In the early 1960s an opportunity to learn French winemaking techniques arose when the Embassy of France offered him and Br Joseph Lamb scholarships to study oenology and viticulture in Bordeaux.

His winemaking knowledge and expertise was exceptional for that time in New Zealand, says current Mission Winemaker Paul Mooney, who was assistant winemaker to Br John from 1979 to 1982.

In the '60s and '70s the wine industry in New Zealand was still at a rudimentary stage as it transitioned from the production of fortified wines to table wines.

"Br John learned French, both oral and written, and studied at the University of Bordeaux on wine analysis," says Paul. "He brought back French winemaking textbooks and applied modern winemaking techniques to wine production. He was very innovative. He introduced traditional French techniquessuch as whole bunch pressing and barrel fermentation, as well as carbonic maceration and submerged cap red wine fermentation.

"Both he and Br Joe worked with others in the local industry, sharing the knowledge they gained in France. Br John worked closely with Denis Karza at McWilliams who made the legendary McWilliams Cabernet and Chardonnays. He was one of the few fully trained winemakers in Hawke's Bay at the time and was held in great respect by other winemakers."

An example of Br John's innovation was his development of the first méthode traditionelle sparkling wine in New Zealand, called Fontanella. Having learned a lot about Méthode Champagne in France, he worked with local engineers in Hawke's Bay to develop the required equipment to make a method traditional wine. "He had the tool made locally to make the riddling racks necessary for disgorging," says Paul Mooney. "It was very much a project started from scratch requiring much innovation on a very low budget. A bottle of Fontanella sold for $4 and was limited to two per customer when it was available."

Br Matt Morris, Assistant Winemaker to Br John in the 1970s, also remembers his generosity in sharing his expertise with other winemakers.

“He was held in great respect by winemakers such as Bob Knappstein, Denis Robinson, Peter Hubscher and Alex Corban to name a few. He was a perfectionist who set very high standards. He was very thorough and could work amid chaos – sometimes created by himself. He was a hard worker and a very physically tough individual.”

The Mission – New Zealand’s oldest winery - was established in 1851 by pioneering French missionaries, and the French influence has always endured. Br John’s French approach to winemaking has been continued to the current day, says Paul. “He oversaw the transition from a cottage industry through to a commercial venture. He was a pivotal man at a critical time for a wine company that has been in continuous operation under the Society of Mary’s ownership for more than 170 years.”

When Br John left the Mission Winery in 1982, he followed his religious vocation in new directions. He taught at St Bede’s and Chanel College in Samoa. Back in Wellington, he gained a SPELD certificate of competence and taught people with dyslexia, autism, and other learning disabilities.

He was then appointed to Wairoa for 17 years where he helped youth with learning difficulties. His last chapter was back in Taradale, where in his 90s he would visit the home-bound who were all younger than him. “He had great compassion for others, especially those less fortunate,” recalls Br Matt. “Wine wasn’t the only passion in his life.”

Ag innovator and contributor leaves his mark on sector

Colin Harvey, one of the NZ agri-sector’s foremost innovators and contributors, died in a drowning accident in late January.

Colin Harvey (ONZM), one of the NZ agri-sector’s foremost innovators and contributors, died in a drowning accident in late January.

An amazing life as a vet

Graham Wallace, one of the country's oldest veterinary surgeons, passed away on October 29 in Auckland after a very long, active life of 96 years and short battle with cancer.

It is quite an achievement for anyone to say they have been in the same job for 40 years and are still going strong. Paul Mooney, chief winemaker at Mission Estate is one of those very few.

Where now with Organic Focus vineyards?

Back in 2011, an ambitious three-year project began, looking at what it took, cost and involved to turn a vineyard from conventional to organic.