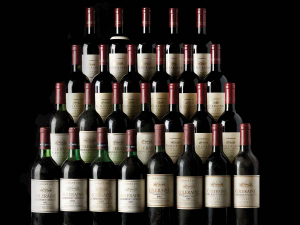 It's a wine seller's market, according to Bob Campbell, MW.

At least that’s the impression I got from a Webb’s Wine Auctions email inviting entries into an upcoming wine auction at their Auckland auction rooms. To encourage sellers to dig deep in their cellars, Webb’s dangled a few wines that had been the subject of spirited bidding.

The 1982 Te Mata Coleraine Cabernet/Merlot, Hawke’s Bay, must surely be one of this country’s more collectible wines. It was the first release of New Zealand’s most iconic wine, Coleraine. The bottle shot showed a fill level at the lower neck which suggests it had been stored reasonably well. I last tasted two samples of this vintage a little over a year ago. They were obviously mature but surprisingly good. An estimate of $140-$160 didn’t stop someone from paying $763.75 including buyer’s premium. Verdict: A fair price given the rarity and iconic status.

2 x 1985 Nobilo’s “Own label” Pinot Noir, Huapai. I held the position of company secretary for Nobilo’s in 1985 and remember this wine well. It was part of a “buy now, drink later” scheme involving a lump sum up front to secure five successive vintages at a fixed price. Rampant inflation at the time ensured that the purchaser got a bargain although it was a costly exercise for Nobilo’s. This is a very early New Zealand Pinot Noir although it was an ordinary wine when first released. Fill levels on the two bottles look “hopeful” on one and “worrying” on the other.
Estimate $12-$20. Price paid $282. Verdict: An exceedingly generous bid.

2 x 1984 Chateau Haut Brion, Pessac Leognan, Bordeaux. Decanter magazine describes the 1984 vintage as, “The poorest vintage of the decade, in which the Merlot crop largely failed, leading to hard, charmless, Cabernet-based wines, overpriced from the start”. In 2003, I visited the Chateau with a group of MWs. They had poured the worst seven vintages they’d made in the past 50 years, including the 1984. It was delicious. In fact, the only bad wine in the line-up was the 1977. First Growth Bordeaux producers seldom release dodgy wines. Both bottles have fill levels at the appropriate/slightly worrying level, but the wine is 36 years old. Estimate $400-$500. Price paid $1,527.50. Verdict: A bit of a gamble, that might pay off.

1 x 2000 Taittinger Comtes de Champagne Blanc de Blancs. This is my second favourite champagne (after Salon) and I love bottle age fizz. There is a risk that the wine has been stored badly although the fill level looks fine. The bottle displays a price sticker showing $445. Estimate $200-$300. Price paid $305.50. Verdict: Should be a lovely bottle of wine (with luck).

1 x 2001 St Francis Riesling, Marlborough. I know nothing about this wine but found the following tasting note of the 2000 vintage on the website of wine critic, Sue Courtenay, which reads: “St Francis Marlborough Riesling 2000 : A delicate medium-sweet Riesling with lovely floral notes, a touch of ginger, honey and a spritzy sherbet (fizzy fruit lolly) sweetness on the finish. Sipping slowly, underlying flavours of limes enrichen on the palate. This wine is developing nicely in the bottle. Tasted 30 Sept 2001.” Good fill level. Estimate $12-$16. Price paid $39.95. Verdict: A bit generous for 20-year-old Riesling sealed with a cork.

How important is vine age to wine quality?

From Donald Trump's sobriety to a NZ$54,461 bottle of Madeira, here's the blog of MW Bob Campbell.