Short on stature, big on performance 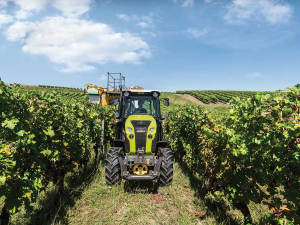 With a minimum width of just one metre, Claas Nexos compact tractors are ideally suited to working in the narrowest vineyards.

Fitted with Tier 4, 3.5 litre, four cylinder FPT engines delivering 75 to 112 maximum horsepower, engine speed can be precisely adjusted at the touch of a button for optimal performance of PTOdriven implements, while also offering 600-hour service intervals. Hydraulic output can be up to 84L/min, using a triple pump system, while also seeing a dedicated power steering pump delivering an extra 26l/minute.

Sporting the characteristic ‘narrow waist’ found on all Claas tractors, the Nexos achieves a higher steering lock angle of 52 degrees, resulting in a tight turning radius of 3.55 metres, while the front overhang, reduced by 88 and wheelbase extended by 50mm is said to make the tractors more manoeuvrable and stable.

The Nexos cab boasts an outstanding all-round view, thanks to six-pillar cab and large glass windows. A low transmission tunnel, alongside the optimised layout of the controls and digital colour display in the instrument panel afford more space and greater comfort for the driver. Large, wide opening doors and a non-slip step make access to the tractor safe and convenient.