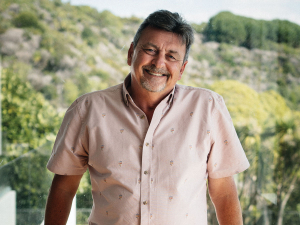 The world is moving towards much more "hybrid" ways of working, and New Zealand is being left behind, says a Kiwi champion of the four-day working week.

Many people overseas emerged from Covid lockdowns with a new mindset, "rethinking" their perception of work, says Perpetual Guardian founder Andrew Barnes, who moved the company to a four-day week in 2018. As an example, he references the "great resignation" in America, as employees resist the call to return to their workplace. "People are saying 'no thanks, we have experienced working from home and we are not going back.'"

Covid-19 has essentially fuelled the movement towards a "different way of working; a much more hybrid way of working". But New Zealand, less impacted by Covid-19, has yet to experience that drive, and is "going on much as we did before", says Andrew from the United Kingdom, where he has a tech firm that's also on a four-day week. He and his partner Charlotte Lockhart also own vineyards on Waiheke Island, trading under Postage Stamp Wines, and run the not-for-profit 4-Day-Week-Global.

Andrew's focus on a flexible company culture and shorter working week began after reading a wealth of research that showed most of the hours in a typical working week are sucked up by distractions, not working, and 'busy-work' that achieves little. A UK study, for example, found the average time spent working is two hours and 53 minutes each day.

His continued curiosity was driven by a desire for greater productivity, but he also wondered whether staff would be "fresher, healthier, happier" with a paid day off each week. The change began with Andrew asking his staff what they could do differently in order to offer the same level of productivity and customer service in a 30-hour week. That would require changes to process ("how do I do my work better?") and to behaviour ("how do I stop surfing the internet at work?"), he says. They then set off on an eight-week trial for all 240 staff around New Zealand, testing productivity, motivation and output.

The results were compelling, says Andrew. "Productivity went up, and that seems to be consistent not just in our trial, but around the world." The increase comes with eliminating the diversions and "busyness", he says. "You get more focus and people stop wasting each other's time." They also saw stress levels reduce and work life balance improve, as well as some unintended outcomes, including some staff opting for full five day weeks, and a reduction in sick days, which have halved since the change at Perpetual Guardian.

Of those results are not motivation enough, the impact of Covid-19 on global workforces should be providing food for thought for New Zealand businesses, says Andrew. It's inevitable that trends for more flexible work will "trickle down" to New Zealand and it's also inevitable that borders will eventually open, he adds. Then employers will have to think more about how they work in a Covid era, with far more senstivity about employee health in the workplace. "You have got to build into your business going forward a resilience that enables you to deal with these issues."

The four-day week is also a tool for businesses struggling to attract and retain staff, Andrew says. "If your competitor goes to four days a week, your staff are going there." Hospitality in particular, including that in cellar doors, has a lot to gain from a shift to fewer hours worked more productively, he adds. Research cited by 4-Day-Week-Global indicated that 63 percent of businesses found it easier to attract and retain talent with a four-day week, and 78 percent of employees with four-day weeks are happier and less stressed.

In late July, United States Democratic Congressman Mark Takano introduced legislation that would reduce the standard work week from 40 hours to 32 hours. Andrew says that shows the energy of the trend because "the Americans are probably the very last people on the planet who would go to shorter working hours".

The congressman said a shorter work week would benefit both employers and employees alike. Pilot programmes run by governments and businesses across the globe had shown promising results as productivity climbed and workers reported better work life balance, less need to take sick days, heightened morale, and lower childcare expenses, he said in a release. "At a time when the nature of work is rapidly changing, it's incumbent upon us to explore all possible means of ensuring our modern business model prioritises productivity, fair pay, and an improved quality of life for workers."

Andrew and Charlotte's nascent Waiheke wine operation is largely staffed by contractors, so not yet under a four-day week protocol. There are some complexities in taking the model to an agricultural environment, but "you have to walk the talk", Andrew says. "I haven't yet turned my attention to how I will give the opportunity to staff to do it."

Perpetual Guardian engaged the University of Auckland and Auckland University of Technology (AUT) to measure the outcomes of the four-day working week trial in 2018.

They found that job performance was maintained in a 30-hour week, while staff stress levels were lowered, from 45 percent before the trial to 38 percent afterwards.

The white paper refers to the UK-based New Economics Foundation, which says a 'normal' working week of 21 hours could help address a "range of urgent, interlinked problems", including "overwork, unemployment, over consumption, high carbon emissions, low wellbeing, entrenched inequalities, and the lack of time to live sustainably, to care for each other, and simply to enjoy life".

The paper also references Parkinson's Law, that work expands to fill the time available for its completion, along with the 80/20 Principle, "that says 80 percent of productivity is achieved in 20 percent of our time".

Launching a four-day working week is about bringing more balance to life, says Marlborough winemaker Jules Taylor. "We think it's been a great success."