The natural growth of organics 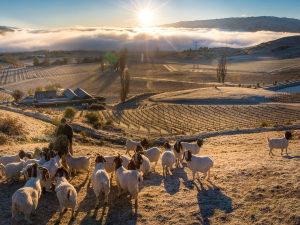 This is the third Organic and Biodynamic Winegrowing Conference Tessa Nicholson has attended. And given the success, it is unlikely to be her last.

Since 2015, when the conference took on a professional persona, there have been some subtle and not so subtle changes. Whereas originally people who attended were very much into the ethos of organics and or biodynamics, there were very few attending who hadn’t taken a step down either road. A tightly held belief (by some) that going organic or biodynamic was plain hippyish, had to be overcome. People had to be shown that organics was a way of increasing quality, not the reverse. There was genuine angst about how to gain recognition for organic wines and just how good organic and biodynamic wine actually is – for the planet and the consumer.

Now I am not saying that those issues have all magically disappeared. But in 2019, at this year’s conference, the desperate wish to get the message across to the unconverted was replaced by a steady confidence. There was no need to preach, or hit your head against a brick wall. The message was not only out there, it had been taken up by hundreds of people who have heard and what’s more implemented.

This year’s conference was a sell-out, two weeks before the opening day. Held in Blenheim, there were people from all over the country, and the world. It became clear very early on from some of the international speakers, that this conference was unrivalled in places like Australia and the US. The fact that it attracted international speakers from the US, Europe, Australia and Chile is an indication of the esteem it is held in. The fact the conference managed to keep those attending interested for three whole days was impressive. And the information that was shared was enlightening – at times frightening – but always enlightening.

Over the next few pages we will break down some of the inspiring information that came out of the conference.

Where are organics at in New Zealand?

“We have just over 1700 hectares certified organic production in New Zealand at the moment,” OWNZ Chair, Jonathan Hamlet says. “That is only 4.5 percent of our total vineyard area. It has been pretty steady for a number of years and it has been higher in the past. Probably one of the biggest factors is that the organic area hasn’t kept up with the overall area of viticulture that has been planted out in the last five years.”

Given 550 hectares of new vines came on stream in Marlborough alone in the 2019 vintage, a third of the total organic plantings, it appears Hamlet is correct.

He admits that historically organics has been led by growers, rather than wineries, although now there are 72 wineries holding organic certification – or 10 percent of the country’s total.

If one area is hitting way above its weight, it is Central Otago. The total percentage of organic vineyards in that region stands at 23 percent, way and above any other region in the country.

In terms of globally – New Zealand’s 4.5 percent is around average. There are over 300,000 hectares of organic grape production in the world – 4.7 percent of all production. The vast majority of that is in the EU, Spain, Italy and France in particular.

So, while Organic Winegrowers New Zealand may not have achieved their initial goal of 20 percent organic by 2020, Hamlet is not disheartened. He believes the steady increase in support, the fact a number of recently planted vineyards are considering converting to organics in the near future, while other organic growers are increasing their current holdings, and the way the world is clamouring for transparency in all food and beverages, the future is looking bright. By the time the next conference rolls around in 2021, what’s the bet that 4.5 percent figure is mere memory?