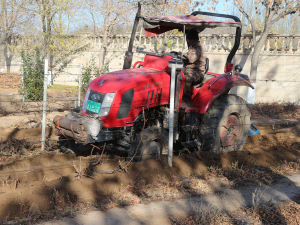 What used to be done by hand is now done by machine. The vines are buried under 70cm of soil to survive the harsh winter months in Ningxia.

A glimpse into the most internationally-accalimed wine region in China, Ningxia.

In November 2019, Tessa Nicholson visited China as part of ProWine Shanghai. While in the country, she spent time in the Ningxia region, talking to wine experts including Professor Demai LI associate professor of Wine Tasting and Enology at Beijing Agriculture College.

It may not be the largest wine region in China, but it is certainly the most talked about in terms of international acclaim.

Situated on the eastern slopes of the Helan Mountains in the central north of China, the area used to be one of the poorest in terms of GDP. Not surprising given the stark conditions that encompass the area.  Prior to 1982 the region was nothing more than an arid desert, that offered little in terms of economic growth for the subsistence farmers.

That all changed when the first vines were planted in the early 1980s, with the support of the national and regional governments. In the past 38 years, Ningxia has transformed itself from an arid desert, to a sea of vines and winery estates that range from the boutique to the multi international conglomerates. Companies such as Pernod Ricard, Moet Hennessey and heavyweight domestic companies such as Changyu, Great Wall and Dynasty all have their foot in the ground, producing wines mainly for the domestic market.

The region covers an area of 66,400 square kilometres, although most vineyards are found within a 150km-long river valley in the north of the region. Within this area there are six sub regions; Shizuishan, Helan, Yinchuan, Yongning, Qingtongxia and Hongsipu.

Visiting Ningxia in November as winter descended on the region, it was easy to see why it used to be such a poor region. The only signs of plant life were the trees growing along the highways. The winds that whip over and around the Helan mountains come straight from Inner Mongolia. They are bone chilling and devastatingly strong. It was not unusual to see what appeared to be tumbleweeds barrowing through the dormant vines.

With winter temperatures that can drop to minus 25 degrees Celsius vines have to be buried underground, straight after pruning. So on my visit, there were not too many vines to be seen above ground, they were lying under 70 cm of soil, and would remain there until April, impervious to the devastatingly cold temperatures and snow. As you can imagine, this is a costly exercise, and until recently was undertaken manually. Now machines have been imported to take on the laborious task, at both ends of the cycle. But even so, it is a fraught exercise with between three and five percent of the vines dying in the process of covering and uncovering.

While winters are extreme, summers are hot and dry. The annual yearly rainfall is just 216.4mm. Compare that to Marlborough’s 647mm. However, irrigation is readily available, from the nearby Yellow River, ensuring the vines survive during the long months of arid conditions.

Variety wise, only a handful were initially imported from France, including; Cabernet Sauvignon, Cabernet Franc, Pinot Noir, Merlot, Marselan, Malbec, Petit Verdot, Chardonnay and Viognier. Cab Sav makes up 50 percent of all plantings and is the variety the region is becoming best known for.

Prices for the wines from this region are high – with many of the Cab Savs selling for hundreds of New Zealand dollars. Are they worth that price? That’s not for me to judge, but given the high cost of production due to climatic conditions, and the cost of the expansive wineries, it is not surprising that the companies have to make hay while the sun shines.

After investing over $1 billion and following 10 years of poor returns, Fonterra has agreed to sell its China farms for $555 million (RMB ¥2.5 billion).