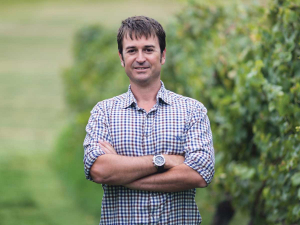 “It’s not typical to have electricians still in the crush pit when fruit is coming in,” says Group Chief Winemaker Nick Picone of the first vintage in an unfinished winery. “It was chaos.”

But that pressured vintage, with its hot start, rainy slog and fine finale, produced wines that have showcased Hawke’s Bay’s unique and distinctive character, says Nick. The Cellar Selection Syrah Hawke’s Bay 2018 won the 2019 New Zealand Wine of the Year Champion trophy, while the Champion Wine of Provenance trophy went to the Reserve Gimblett Gravels Syrah, Hawke’s Bay 2006, 2013 and 2018. Then, the Villa Maria Reserve Hawke’s Bay Chardonnay 2018 won Winestate Champion Chardonnay and Champion Wine of the Year 2019, chosen out of 10,000 wines judged across the year. “We’ve had an amazing year really, in terms of Villa Maria successes, and Hawke’s Bay in particular has been in the spotlight,” says Nick, who won New Zealand Winemaker of the Year in the Winestate competition, where Villa Maria was also awarded New Zealand Wine Company of the Year, claiming the title for the 17th time in 22 years.

Hawke’s Bay’s success in the awards is good for New Zealand as a whole, says Nick. “We know and respect the fact that Sauvignon Blanc is our engine and our reputation nationally. But I think it’s also important for New Zealand to show the full depth of what we can achieve - the diversity, but also the quality that can be found in other regions with other varietals. It makes New Zealand more complete as a wine producing proposition, I guess. It adds value and depth to the New Zealand story.”

Nick says 2018 was one of the hottest summers on record in Hawke’s Bay, and certainly hotter than the past 10 years. “I think it was the heat of the summer that ultimately set up the results of that vintage.” But it was followed by autumn rains from early March, creating the “perfect storm” for a pressured harvest in a brand new winery, with Vidal, Esk Valley, Villa Maria and Te Awa suddenly under the same roof and sharing the same resources. Chardonnay was harvested in nine days, with all the intensity of hand picking, whole bunch pressing and juice straight to barrel, while the aforementioned electricians scurried out of crush pits, and tanks were hoisted into position.

“There was a lot of escalation and a lot of rain,” says Nick, who describes the vintage as seeming to conspire against them. But then the furore was over and the sun was shining. “The second half of that vintage was awesome. The rain finally buggered off and we had beautiful blue skies and finally dried off again. It allowed the reds that opportunity to finish off what they had started in the summer months.” Meanwhile, the Chardonnay fruit, picked in haste, was exceptional, and likely better than it would have been had they had the luxury of leaving it on the vine longer, says Nick.

When it comes to the Syrah, he says Hawke’s Bay produces a style that is unique and distinctive, thanks to the climate and the “fit of the grape to the terroir”. The trick is to balance its rotundone peppery characteristics with ripe fruit and ripe tannins, so the wine isn’t too “edgy” but retains its personality, he says. “We have that in spades. It’s all about harnessing that and then bringing consumers along for the ride.” The champion Cellar Selection Syrah Hawke’s Bay 2018 is sourced largely from Bridge Pa vineyards, with the final third coming from the Gimblett Gravels, says Nick “I think it’s a really nice combination of the sweetness and fragrance of that Bridge Pa sub region, with a bit of richness and structure from Gimblett Gravels.”

He says Hawke’s Bay winemakers are increasingly building some of Pinot Noir’s attractiveness into their Syrah, with less extraction, less oak and more whole bunch, “aiming for perfume and fragrance and subtleness rather than size”. In the late 1990s and early 2000s, Hawke’s Bay Syrahs were big, tannic oaky wines, as were its Pinot Noirs, he says. “It’s a maturity thing. We’re on this journey and we’ve already had some really nice evolution in the wine styles. We are learning that less is more.”

Nick has been with Villa Maria for a good stint of that journey, starting as a teenager with the company more than 20 years ago. His father, owner and operator of Vince’s Vineyard Tours in Hawke’s Bay, gave him a taste for the industry, as did a memorable glass of Esk Valley Merlot when he was 16. In 1996, after leaving school, Nick completed a one-year certificate in Grape and Wine production at Eastern Institute of Technology (EIT) in Hawke’s Bay, prior to his first harvest at Esk Valley the following year. Several vintages at Esk Valley and a stint in California followed and, increasingly sure he was on the right path, Nick completed a Degree in Wine Science at EIT.

By 2003, he was assistant winemaker at Villa Maria Marlborough and over the next four years worked his way up to winemaker, before moving to the Auckland winery in 2006, and taking up the role of North Island Winemaker, then Head Winemaker in 2008. Now back home in Hawke’s Bay, he’s Group Chief Winemaker, and retains a hands-on focus on Villa Maria’s Hawke’s Bay wines. He says New Zealand’s oldest wine growing region may be number two in volume, and a long way behind Marlborough, but it brings a whole lot to the story of New Zealand wine. “We are doing things that are quite different at the other end of the spectrum.”

The recent award successes will make a difference, but Syrah is a niche market and sales are tiny on a global stage, says Nick. “Let’s face it, the biggest challenge internationally is to turn up with anything other than Sauvignon Blanc.” Pinot Noir has a window of opportunity in international circles, and Pinot Gris is making some good ground, “but everything else is a slow burn and a hand sell”, he says. That includes Chardonnay, which he sees as producing some of the greatest wines being made in New Zealand. “We have real potential with premium Chardonnay, but it’s an incredibly crowded category. This will be a long game, but it’s just a matter of time before the quality of the wines and the international endorsements begin to open new doors.”

A blind tasting of 48 2018 Syrahs from around New Zealand showed the country’s best can compare with their Rhône counterparts, says Maxime Cavey of Hawke’s Bay Winegrowers.