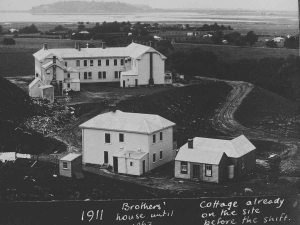 La Grande Maison in 1911. The iconic house is now home to a restaurant and cellar door.

Mission Estate Winery was established in 1851 by pioneering French Missionaries, making it New Zealand’s oldest winery with a fascinating past.

Their story begins in 1838, when a group of French Missionaries set sail to New Zealand with little more than their faith and a few vines. Successfully landing in Hawke’s Bay in 1851, the Fathers established a mission station at Pakowhai, and followed the tradition of running a balanced farm property with fruit trees, cattle and a vineyard.

When war broke out between rival Māori tribes, the French Missionaries moved from their original site to a new location in Meeanee. The move was completed in 1858, and in the following years they became central to the community that built up around them.

Vines were planted to create both sacramental and table wine, to continue their wine-drinking tradition, as well as contributing revenue through wine sales to support the community.

“Brother Huchet introduced a press house, a grape crusher, achieved New Zealand’s first International medal at the Paris Wine Awards in 1889, and he was also responsible for extending the commercial sale of wine at Mission in the late 1800’s” says Chief Winemaker Paul Mooney.

“He remained in charge of the vineyards and cellars until his death in 1899.”

Today, Mission Estate’s most premium range of wines are named after Brother Huchet who instilled the wealth of knowledge that lives on at Mission Estate today.

Mission has never lost sight of its French heritage, as over the years, Brothers of the Order have travelled to France to study and learn viticulture and winemaking skills. Mooney trained with Brothers who had trained in Bordeaux, France, strongly influencing Mission Estate’s wine style today.

Mission Estate was the first New Zealand winery to use the traditional French techniques of whole bunch pressing and barrel fermenting Chardonnay back in the 1980’s, and was also the first winery to make sparkling wine using the Methode Traditionelle technique – learned directly from France. Brother John Cuttance first started experiments in 1961 to make a bottle fermented sparkling wine, releasing the first one, named Fontanella in February 1963. The Rector of the Mission at the time, Fr Kelly S. M. coined the name, “Fontanella, it reminds me of the little fountains I saw in Rome”.

The winery’s history does influence the way they work today. Mooney explains; “When French Marist brothers established the Mission Station, they followed the tradition of running a balanced farm property – fruit trees, cattle and a vineyard. The philosophy behind this holistic approach, and the care for the land, community and people has continued to be a strong theme within Mission Estate from these early days.”

Having weathered earthquakes and floods in its long history, what does Mission Estate see for the future of New Zealand wine over the next 150 years?

Mission Estate has been committed to the industry standards of sustainability for over twenty years. They were 100 percent Sustainable Winegrowing NZ certified since the programme’s inception in 1995 and ISO 14001 certified since 1998.

In 2007, Mission Estate went a step further, rebuilding the winey to become one of New Zealand’s most energy efficient whilst undergoing a major extension. “With virtually no usage of fossil fuels and electricity being 80 percent sustainable in New Zealand, we have a very low carbon footprint.”

Mission Estate has a few vineyards organically certified and more underway in the three-year conversion process.

“With a heightened awareness and desire from consumers of environmentally responsible practices, sustainability and even organics, there will be a continuation and strengthening of environmental practices already employed, as well as better communication from wineries around what they are doing,” says Mooney.

And what will New Zealand be planting? He names 1983 as a vintage that stands out over the past 150 years, because the el Niño weather pattern with a warm dry season offered a glimpse into the future of Hawke’s Bay wine at the time.

“It heralded the introduction of varieties such as Merlot and Chardonnay (which we barrel fermented for the first time). The crop loads were quite high; however, due to the great weather conditions there was great fruit maturity. It gave a glimpse of what Hawke’s Bay was capable of achieving and encouraged the development on vineyards in new areas more suitable for viticulture, including the Gimblett Gravels and the Ngatarawa Triangle.”

“Overall, we’ve come a long way in winemaking and viticulture in a short period of time. In the last 10-15 years we’ve made significant progress, our wines are getting better and vineyards older, and our winemakers and viticulturists more experienced.”

If visiting La Grande Maison of Mission Estate, as you follow the driveway, there is a snapshot of 1838 still very much alive.

One row of Muscat grapes that were grafted over the years from the very original stock brought to Futuna Island by the Marist Father Saint Peter Chanel. One wonders what they would’ve thought, had they known their legacy was going to continue as Mission Estate today and well into the future.