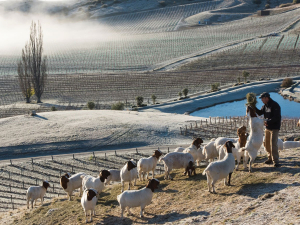 The Green Wine Future 2022 conference was the most ambitious event of its kind, says New Zealand Winegrowers Sustainability Advisor Tessa Chilala in summarising the "exhaustive programme".

Day one of the conference was hosted by Latin America, in association with Wines of Chile. Yealands Estate's Michael Wentworth was part of a session entitled Green House Gas Emissions: Identification, Education, and Mitigation. Michael spoke about being the first winery in the world to be carbon zero from incepton, as well as being a member of International Wineries for Climate Action (IWCA). He stressed the importance of gaining buy-in from top management while also embedding sustainability throughout the entire staff culture, says Tessa.

Day two was hosted by Africa, in association with Wines of South Africa. A panel discussion on Biodiversity and the Vineyard of Tomorrow included Jonathan Hamlet, National Vineyard Manager for Craggy Range, who spoke of the need for creative solutions to offset negative soil health impacts associated with monocultures, such as the company's trial run of native species planted under vines, with potential to support soil microbiome health.

Spain hosted day three, in association with Interprofesional del Vino de España. Bragato Research Institute (BRI) scientist Darrell Lizamore joined a session on Wine Grapes in a Changing Climate, talking of BRI's Sauvignon Blanc Improvement Programme, which aims to accelerate grape vines' natural ability to adapt to a changing environment. Belinda Jackson from Lawsons's Dry Hills also participated in day three, outlining the Marlborough wine company’s history of sustainability leadership, having gained both ISO 14001 certification for environmental management and ISO 14064 carbon zero status. Decades of commitment to low impact operations has resulted in 37% lower energy use per litre of wine compared to the industry average for wineries of equivalent size, and water use per litre of wine 57% below the industry average, says Tessa. “Belinda noted the importance of independent auditing to bring credibility to claims and its usefulness in providing assurance to export partners and other stakeholders.” Day four was hosted by Oceania, in association with New Zealand Winegrowers (NZW), and included Dr Edwin Massey, NZW General Manager of Sustainability, speaking on a panel entitled Navigating the Waters of Government Policies, in which two clear themes emerged. “Water security and climate change are two of the most urgent environmental issues being addressed between governments and primary sectors,” says Tessa of the first theme, with the second being the importance of primary sectors, including the grape and wine industries demonstrating leadership and informing the design of government policy “from the ground up”.

Nigel Greening from Felton Road presented on The Value of Organic and Biodynamic, and cautioned against falling into entrenched positions in caring for the land, environment and people, says Tessa. “His call to action is to question dogma and labels – hybrid approaches are needed as there is no one ‘correct’ route or solution.” Nigel said regenerative agriculture had the potential to build bridges between different cultures of sustainable thinking such as organics, biodynamics and controlled chemical use. Steve Smith MW, Managing Director of Aotearoa New Zealand Fine Wine Estates, spoke in one of the final sessions, entitled What Is Regenerative Viticulture? Although Steve and his team practice organics and biodynamics, he does not believe these systems are fit for purpose in terms of addressing today’s challenges, says Tessa. “To Steve there is no value in the myriad certification schemes available on the market now, if the schemes themselves do not genuinely address the issues we are facing, namely: a demanding, fragile climate; stressed water systems and biodiversity in peril.” The answer instead lies in science and “natural wisdom” working side-by-side in a more intuitive way, she adds. “This science, he argues, must not be reductive, but rather organic, fluid, creative science. He stressed that what matters are outcomes, not inputs.”

Environmental sustainability is a subject close to Sam Neill’s heart.

Sustainability, climate crisis, biodiversity, wine toursim, regenerative viticulture and energy efficiency are just some of the topics on the table at Green Wine Future, which will run virtually from eight different parts of the globe, from 23-26 May. We talk to Pancho Campo about why it's to important to get the world of wine on track for a greener future.

New Zealand Winegrowers will host the Oceania leg of the global Green Wine Future conference, to be held virtually in May.

New Zealand Winegrowers is to host the Oceania leg of the virtual Green Wine Future Conference this May.