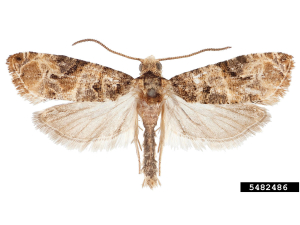 Lobesia botrana (the European grapevine moth), is one of the most unwanted exotic pests for the New Zealand wine industry. Image from Bugwood.org

How ready are we for a Lepidopterean incursion?

This is a question currently being addressed by a group of Government-Industry Agreement partners, with the establishment of a working group tasked with reviewing the successes and failures of previous responses alongside the current risks posed to New Zealand by exotic Lepidopteran pests.

Lepidoptera is an order of insects that (notably) includes butterflies and moths. There are more than 180,000 different species included and it is one of the most widespread insect orders in the world. Lepidoptera regularly arrive in New Zealand via a variety of pathways, and several biosecurity responses have taken place previously for the likes of gypsy moth, painted apple moth and the great white butterfly. While many Lepidoptera are important pollinators, several exotic species present significant biosecurity risks to New Zealand’s forestry, horticulture and viticulture industries as well as to the natural estate and urban parks and gardens.

More than 100 lepidoptera species have arrived and established in New Zealand in the last century, most arriving from Australia but some as hitchhikers on imported goods from other countries. The majority have had little to no impact on forestry and the native estate, but some have required management in arable, pastoral or fruit crops (such as grass webworm and codling moth). Biosecurity responses have occurred for the most damaging pests where populations have been deemed small enough to have a reasonable chance of eradication, and a few species have been successfully eradicated (e.g, white-spotted tussock moth, painted apple moth, fall webworm, Asian gypsy moth and great white butterfly). While ultimately successful, some of these responses used tools and methods which may now be considered socially unacceptable (such as aerial pesticide spraying in urban areas). There are questions around whether such methods could or should be used again in response to future incursions.

The highest risk exotic Lepidopteran pests for the New Zealand wine industry include Lobesia botrana, the European grapevine moth, and Polychrosis viteana, the grape berry moth. The European grapevine moth is a quarantine pest worldwide. It could come into New Zealand as larvae or pupae on infested propagation material, via the import of table grapes for consumption, or on imported machinery. Originally from southern Europe, where it is relatively widespread, it has also invaded several African nations, much of Asia, North America (however, eradication was achieved there in 2016) and two South American nations (Chile and Argentina). The grape berry moth is currently only known to be present in Canada and the United States. Several other exotic Lepidoptera may impact winegrapes in New Zealand, particularly if other, more preferred hosts are absent or difficult to locate.

New Zealand Winegrowers, several other industry groups, and Biosecurity New Zealand have formed a Government-Industry Agreement (GIA) working group, reviewing New Zealand’s readiness for an incursion of a serious Lepidopteran biosecurity threat. The group is currently compiling a report that considers the current risks to New Zealand’s productive and natural estates, lessons learned from previous responses in New Zealand and globally, tools and strategies available, and the state of existing readiness and response plans. This report should be able to be shared with members via nzwine.com once finalised.

During August, I will be on the road attending the Spray Days events around the country.