Biosecurity risk — when, not if 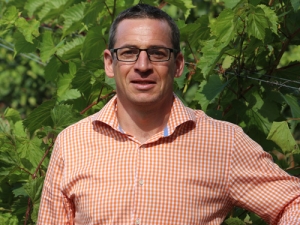 A biosecurity risk to the New Zealand wine industry is very much a case of when.

Ed Massey, NZW's new Biosecurity Manager, isn't being provocative when he makes that statement, it is something he strongly believes. What's more he wants everyone in the wine industry to be thinking along the same lines, to ensure that risk is mitigated before it becomes a major issue.

Massey who took up his new role as Biosecurity Manager for NZW in March, comes into the job with a comprehensive understanding of the risk this country faces. Ten years experience working with MPI, with the last four as manager of the plant and environment response team, ensures he knows what he is talking about. He held major roles in the MPI response teams that dealt with the Queensland fruit fly detections in the upper North Island in 2012, 2014 and the more significant fruit fly incursion in Grey Lynn last year.

This country does have a few major advantages when it comes to combatting biosecurity incursions. One being our geographical isolation. The other our climate, which with cold winters ensures tropical pests and diseases don't survive Massey says. But with those advantages comes an issue of complacency.

"The fact we are far away from other land borders has insulated us a little bit from the potential effects of biosecurity incursions," he says. "But when you look at the volume of trade across the board, it has increased markedly in the last 15 years and as we keep growing our economy, it will continue to grow. As well, New Zealand is a very popular tourist destination, and trade as well as travel are sources of potential biosecurity risks. If you look at the last five or six years we have had PSA in Kiwifruit and then a number of fruit fly responses. They may not have had an impact on the wine industry, but what it shows is that there are significant events that can happen. To prepare for these events we have to work hard to ensure the biosecurity system is as robust as possible to mitigate risks before they eventuate while ensuring we are well prepared to respond quickly and effectively to an incursion should we need to."

Which is why one of Massey's key roles in his new job will be to ensure all industry members are aware of what to look for and more importantly what to do if they stumble across something they are not sure about. Everybody involved in the industry should have the Emergency Pest and Disease Hotline number in their phone. (0800 80 9966)

"That hotline is my mantra," says Massey. "It is imperative that all our members know that number and are confident enough in MPI processes to use it should they see something unusual in their vineyard."

Increasing awareness of risks to the industry is just one facet of the job for Massey. The other priority for him is to formalise a Government Industry Agreement (GIA), between NZW and the government. Currently NZW is not a signed up member, and he is keen to design a process that ensures the industry gets a mandate to join.

"Then we can implement that process and work to ensure the partnership with MPI ensures better biosecurity outcomes for our industry."

Massey says there are three key planks to a GIA. Firstly, joint decision making in a biosecurity response.

"What that means is if a pest comes in that affects our grapes or vines, through a GIA partnership we would be notified early of that detection. We would also be a joint decision maker in whether to initiate a response, in other words whether to press the 'no or go' button. We also would have decision making rights on the governance of that response, so we are in control of our own destiny – that is really important."

The second plank is creating a state of readiness Massey says.

"By joining GIA it helps to ensure agreement on joint priorities for readiness. For example if there was some key work to be done on say Sharp Shooter or Pierces Disease we could work with MPI to make it a high priority to get that work done. Pre planning for incursions is a key element of readiness as it means a faster more organized response, in essence managing risk before it arrives."

And the third plank is engagement across the system, especially as the biosecurity system is multilayered.

"We have off shore trade agreements, plant standards and treatment regimes, we have inspection at the border, and then we have post-border readiness and response and long term pest management. Being better engaged through GIA ensures we have a much better understanding on how decisions are made at the various parts of the biosecurity system. So we have better information around the rationale for those decisions and we have the ability to better engage with those decision makers across the different parts of the system."

Massey says for all the above reasons, it is vital that NZW is part of a GIA, sooner rather than later.

"Getting the GIA signed between the government and NZW is a key priority for my role in 2016."

In terms of what he considers to be the greatest threat facing the wine industry currently, Massey doesn't hesitate. It's Brown Mamorated Stink Bug.

"It is an insect pest native to China and other Asian countries, but in the last 20 years it has invaded the US. It has had a significant effect on horticultural production over there. It has a wide host range and can impact on a wide number of crops including grapes, and can be quite destructive. It is very difficult to eradicate once established. New Zealand doesn't have this pest at the moment, however we have been intercepting it on a number of pathways at the border and it is really important that wine growers are aware of the pest and that industry organisations work together to maximize opportunities to ensure New Zealand remains free of it."

In the meantime, Massey reiterates that the industry has to be vigilant moving forward. If as he believes the risk of a biosecurity incursion is just a matter time, everyone needs to be reading from the same page to ensure that risk is mitigated as early as possible.